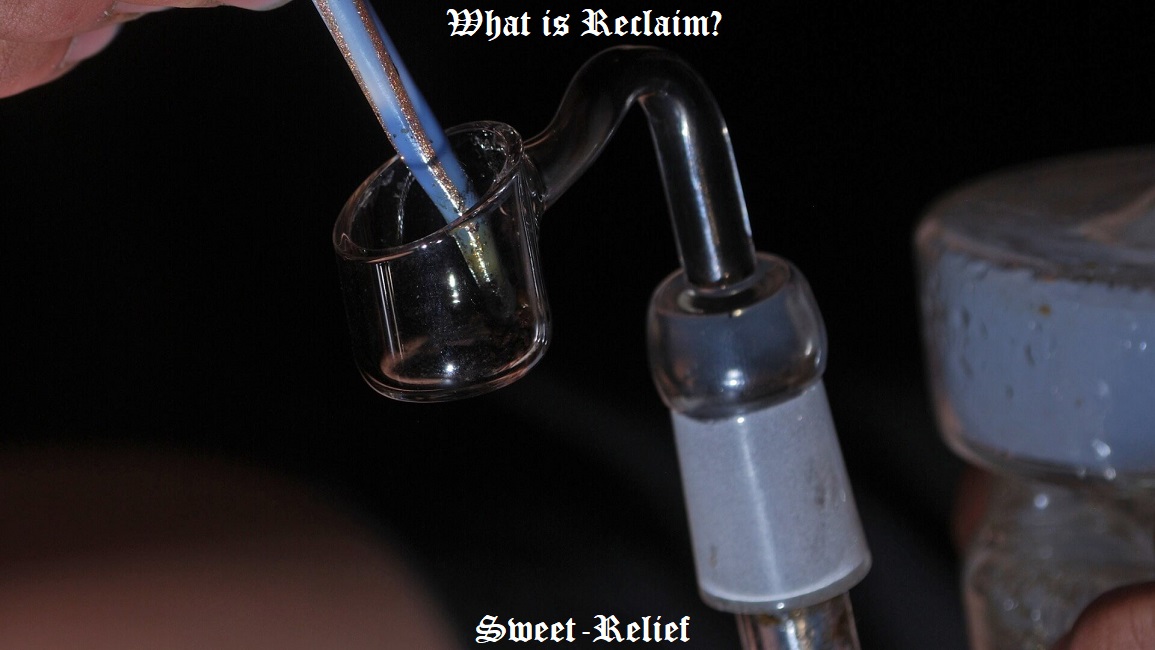 Reclaim refers to the residual substance from a smoked concentrate that collects in a dab rig. Since oil and water do not mix, the reclaim often collects in the water as globs of oil concentrate. Reclaim also coats the interior surfaces of the dab rig as an oily residue. It can be collected and re-smoked or consumed as an edible instead of being discarded.

Despite resin being used to refer to both reclaim and rosin, for example, these products are completely different.

Rosin, for example, is a concentrated form of the resin naturally found in cannabis, which, after extracted and processed, contain a higher terpene and cannabinoid content than regular cannabis products which results in a more potent effect.

On the other hand, reclaim is the leftover resin that results from, for example, smoking rosin; Reclaim resin does not contain any terpenes and does not contain as much cannabinoids as rosin, and it contains harmful carbon byproducts of smoking so it’s not as pure as rosin or other concentrates.

To give you a better idea of the contents of these types of resin, we’ve come up with a table with the cannabinoid contents of both reclaim and resin, just have in mind that it’s an approximation and the amounts may vary depending on the product.

Can You Smoke Reclaim?

So basically, you can smoke reclaimed resin but it may end up not being a very nice experience because, as you can see in the table above, it contains cannabinoids but has more THC than rosin so it may not be the type of effect you were looking for.

How to collect reclaim

There are couple ways to collect reclaim from your dab rig, both pretty simple.

The first way is to pour the water out of your rig and then pick out the little goldish clumps. Chances are there won’t be many as the majority of reclaim will be stuck to the inside of your device.

The second way to collect reclaim is to melt it out. All you need is a torch and some wax paper:

Just don’t let it get too hot because you don’t want to burn out the cannabinoids.

Ways to use reclaim

There are 3 possible ways to use reclaim after collection: dab it, eat it, or trash it.

If you dab it, just be aware that it will not taste anywhere near as good as your original dab.

Since reclaim has already been decarboxylated, you can just straight up eat it as is and you’ll be fine. However, we suggest consuming reclaim alongside something flavorful like a handful of grapes or a Reese’s cup to mask that dirty hash taste. To completely avoid that taste you can also infuse food with reclaim.

If consuming reclaim doesn’t appeal to you, but having a squeaky clean bong does you can also just collect your reclaim and toss it into the trash.

What to Do with Reclaim

Surprisingly, there are many uses for your reclaim. And if you’re concerned about potency, throw those doubts out the door. Reclaim actually has a pretty high level of cannabinoids that can get you feeling effects in no time.

According to a study conducted by MCR Labs, reclaim had as much as 65% total cannabinoids remaining. Of those cannabinoids, more than 95% were decarboxylated on average. Because of the high activation percentage in reclaim, you do not need to manipulate it to feel its effects, opening up a wide range of possibilities for consumption.

If you’re wondering what to do with your reclaim, try some of the following ideas:

Taking a dab of your reclaim is an effective way to feel instant effects. After all, reclaim is still concentrate. Don’t expect the flavor to be great though. Because of the heat from the initial dab, most of the terpenes are far gone at this point.

Because it is almost completely decarboxylated, eating your reclaim is a viable option and will produce some fairly strong effects. You can eat the reclaim straight, drizzle it on some food or even capsule it up to avoid any bad taste. Some people freeze their reclaim in little balls and pop them like candy!

Ever wanted to make your own edibles? With reclaim, you can! Just be sure not to cook with temperatures over 350°

There are probably a few more uses for reclaim that we haven’t mentioned, but you get the gist. It’s a pretty versatile substance that can help you catch a buzz in a pinch.

Should I Throw Away My Reclaim?

Let’s change the subject a bit now and shift focus to the opposing argument for reclaim – to simply throw it away. There are many concentrate connoisseurs out there who wouldn’t be caught dead consuming reclaim. It’s kind of like smoking resin from a pipe; the flavor is poor and the smoke is a bit harsh, so why not just consume something fresh? After all, concentrates are all about the terpenes, right?

While it may be less economical, those who don’t consume reclaim might argue that it’s not worth the time to collect the reclaim, or that they simply prefer to take exclusively clean, flavorful dabs. More than likely, people who don’t use their reclaim wash it out of their rigs and down the drains.

Whether you use it or not, reclaim is a part of concentrate consumption. And there’s really no right or wrong way to deal your reclaim either. Eat it, dab it or simply wash it away, the choice is yours!