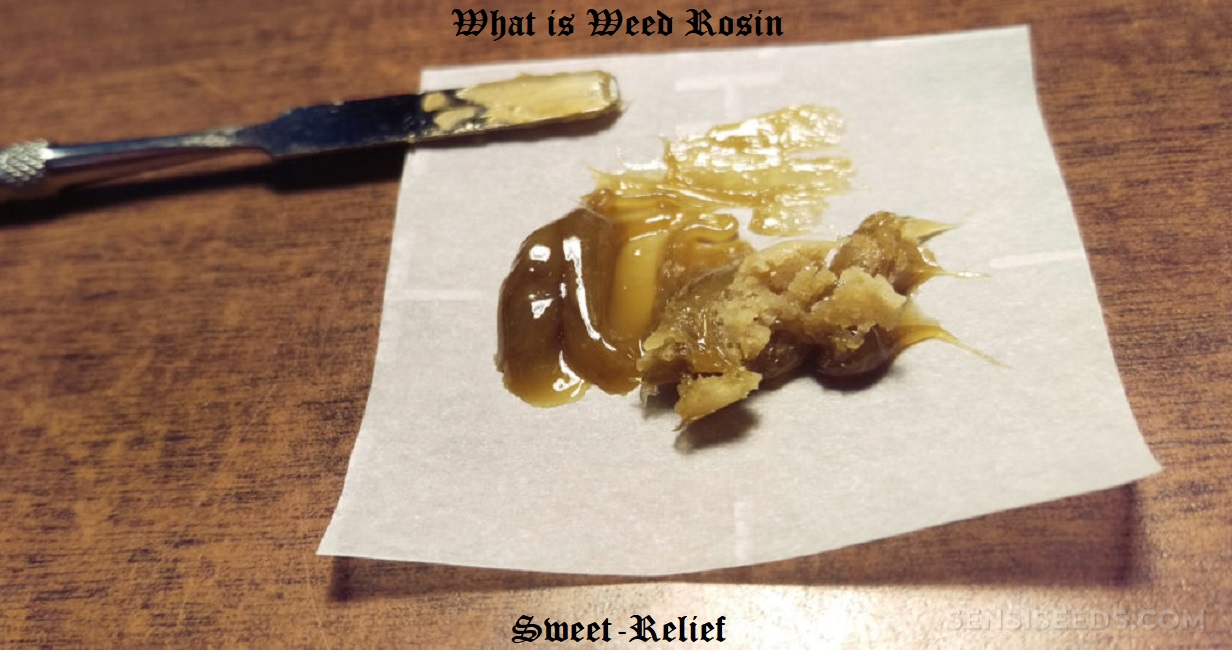 The resulting concentrate when heat and pressure are applied to the cannabis plant. Rosin is a desirable technique because its concentration doesn’t require the use of external solvents. It can also be used to turn lower-grade hash into a concentrate that can be dabbed. Cannabis can be pressed into rosin by a professional with an industrial press, or at home with a hair straightener.

Rosin is a marijuana extract that is free of chemicals and can be inhaled with a regular pipe, dab rig, or vaporizer.

I prefer my concentrates solvent-free, so I choose rosin.

Over the past several years, both rosin and rosin presses have been gaining popularity in the cannabis industry, and for good reason. Don’t let the common nickname of the “everyman’s concentrate” fool you though (this term only refers to the accessibility and simplicity of the extraction), rosin is no run of the mill product.

In fact, rosin rivals the potency and purity of some of the most advanced hydrocarbon extracts on the market – without the use of any solvents. What once was a product made in bedrooms and garages with hair straighteners and t-shirt presses has grown into a full-scale manufacturing movement.

Rosin is a solventless extract that uses heat and pressure to force the compounds within the trichome gland out of the cannabis plant, where all of the THCA, other cannabinoids, and terpenes are located. Think of it like squeezing the juice from grapes or oil from olives, with the end result being similar to butane hash oil (BHO), but without the harmful chemicals.

The rosin process serves as an alternative to a closed-loop extraction system, which outside of cannabis production, is used in making essential oils. Closed-loop extraction is time-consuming, requires technical training, a lot of expensive equipment — pumps, a tank, and a specially designed room to perform the extraction — and you won’t have a solventless concentrate until you purge all the residual solvents using a vacuum oven. Even then, there may still be minor amounts leftover in solvent-based extracts. (Warning: Do not try any processes involving chemicals at home; these should be left to a professional.)

While rosin will also have a high THCA concentration and should be consumed carefully, the process of making rosin is considered safer than many other concentrates. With the temperature and pressure used during the rosin extraction tending to dictate color and consistency, rosin is available as shatter, wax, badder/batter/budder, rosin coins, and taffy.

Although it may have accidentally been made long ago and there is much debate on its origin, rosin was first introduced to the cannabis community through ICMag in 2006 by forum member Compashon. It only gained notoriety in 2015 when Phil “Soilgrown” Salazar, known by @soilgrown_solventless, started making and snapping pictures of it while attempting to make use of some lower-quality hash.

While pressing the hash to flatten it out, Salazar noticed that resin started spewing out the side, leaving the original hash dry and unusable. Thinking he may have stumbled upon a new technique, he took a piece of hash, put it between parchment paper, and pressed it against a hot dab nail. Then came the oil, now known as rosin. He began using a hair straightener after experimenting with his wife’s hair curler. She suggested he then use the flat-iron tool, and after running out of hash, began using buds. The oil came out the same way.

In the few years since, rosin production has evolved to using screens and an industrial press to make mass quantities and more consistent products.

Rosin can turn low-quality hash into a dabbable wax. It’s also a very quick process compared with other extraction methods. It doesn’t require time in a vacuum oven to purge out residual solvents. It can be made safely at home with minimal investment, allowing home growers to make the most of their trim, typically a byproduct that’s thrown away.

A variety of input materials can be used to create rosin. The input material can affect how many plant contaminants are left in the rosin, which can therefore affect the quality of rosin. Rosin from a flower is going to be different from rosin from kief or ice hash, for example.

How To Use Rosin

Rosin is a very versatile concentrate that can be enjoyed in a variety of ways. Here are the 5 most common ways that it’s typically prepared and used!

Dabbing concentrates really brings out the terpenes and lets you enjoy the myriad of flavors and aromas that each strain contains. Since rosin already has a robust terpene content, you can be sure that your dabs will be extra delicious! If you are looking to maximize flavor and taste, dabbing rosin is the way to go.

If your vaporizer is designed for use with cannabis concentrates, you can simply load up your rosin and vape it. If you prefer, you can also prepare your own rosin-infused e-juice at home in just a few steps. Whatever kind of vaporizer you choose to vape it out of, just make sure it is safe to use with concentrates. Vaping rosin out of a dry herb vape could lead to a sticky mess and irreparable damage!

It may seem counter-intuitive due to its sticky nature, but rosin can also be crushed up and rolled into a joint, blunt, or spliff. Just remember to dry it out first so you don’t end up with a sticky mess. Alternatively, you could heat it up and spread it across your rolling paper with an applicator tool. You may find that the added stickiness may make the rolling process easier for you (or harder!).

Bake It into an Edible

Lastly, you can also bake rosin into a cannabis edible. Some people prefer to decarboxylate their rosin before infusing it into something else but others do not believe it to be necessary. A good rule of thumb is that if you wish to maximize the potency of your edible, it is probably a good idea to decarboxylate it before infusing it. But if you are just looking for a quick edible fix, adding it raw directly into your recipe or into other foods and liquids can also get the job done!