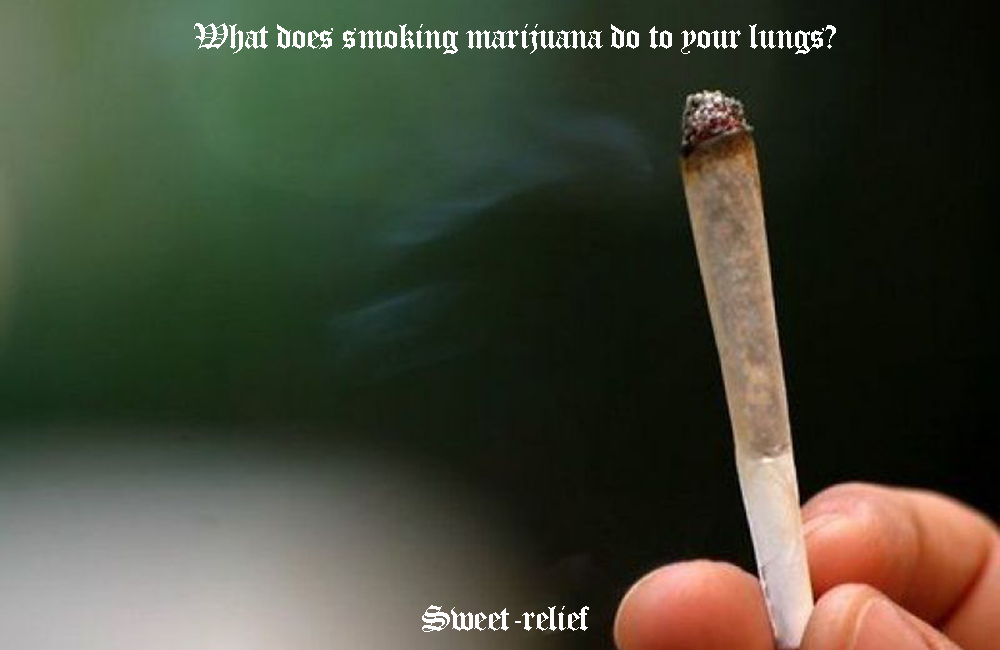 Marijuana smoking is associated with large airway inflammation, increased airway resistance, and lung hyperinflation, and those who smoke marijuana regularly report more symptoms of chronic bronchitis than those who do not smoke. One study found that people who frequently smoke marijuana had more outpatient medical visits for respiratory problems than those who do not smoke. Some case studies have suggested that, because of THC’s immune-suppressing effects, smoking marijuana might increase susceptibility to lung infections, such as pneumonia, in people with immune deficiencies; however, a large AIDS cohort study did not confirm such an association. Smoking marijuana may also reduce the respiratory system’s immune response, increasing the likelihood of the person acquiring respiratory infections, including pneumonia. Animal and human studies have not found that marijuana increases risk for emphysema.

Whether smoking marijuana causes lung cancer, as cigarette smoking does, remains an open question. Marijuana smoke contains carcinogenic combustion products, including about 50% more benzoprene and 75% more benzanthracene (and more phenols, vinyl chlorides, nitrosamines, reactive oxygen species) than cigarette smoke. Because of how it is typically smoked (deeper inhale, held for longer), marijuana smoking leads to four times the deposition of tar compared to cigarette smoking. However, while a few small, uncontrolled studies have suggested that heavy, regular marijuana smoking could increase risk for respiratory cancers, well-designed population studies have failed to find an increased risk of lung cancer associated with marijuana use.

One complexity in comparing the lung-health risks of marijuana and tobacco concerns the very different ways the two substances are used. While people who smoke marijuana often inhale more deeply and hold the smoke in their lungs for a longer duration than is typical with cigarettes, marijuana’s effects last longer, so people who use marijuana may smoke less frequently than those who smoke cigarettes.

Additionally, the fact that many people use both marijuana and tobacco makes determining marijuana’s precise contribution to lung cancer risk, if any, difficult to establish. Cell culture and animal studies have also suggested THC and CBD may have antitumor effects, and this has been proposed as one reason why stronger expected associations are not seen between marijuana use and lung cancer, but more research is needed on this question.

The effects of smoking cannabis on the lungs

There is mixed evidence on the effects of cannabis smoke on the lungs. This is because of a relative lack of literature combined with concurrent tobacco smoking and the reports of conflicting outcomes.

One studyTrusted Source states that cannabis smoke can cause symptoms, such as increased coughing and sputum production, similar to those found in people who smoke tobacco.

Another studyTrusted Source states that the frequency of chronic cough, sputum, and wheezing was similar between cannabis smokers and tobacco smokers.

The American Lung Association states that these symptoms arise due to cannabis smoke injuring the cell linings of the large airways.

Swelling and inflammation in the bronchial tubes cause bronchitis. Acute bronchitis usually clears up on its own, while chronic bronchitis is persistent and may never go away.

A person with this condition usually experiences the below symptoms:

There is differing evidence regarding the association between cannabis smoking and lung cancer.

One 2013 studyTrusted Source stated that people who used cannabis heavily were at an increased risk of developing lung cancer.

Another study from 2012Trusted Source outlines that cannabis smoke contains carcinogens, which can cause cancer.

However, the study adds that there is no evidence that suggests that light or moderate cannabis smoking leads to an increased risk for the development of either lung or upper airway cancer.

However, the same study states that the evidence is mixed when it comes to the cancer risks of heavy or long-term cannabis use.

The National Academies of Sciences, Engineering, and Medicine released their report on the health effects of cannabinoids. They found no statistical association between cannabis smoking and lung, head, and neck cancers.

The report also found limited or no evidence regarding any links between smoking cannabis smoking and:

There are a couple of other ways a person can consume cannabis that do not involve smoking the substance.

A person can consume cannabis in edible form, which is the name for foods and drinks infused with cannabis.

Edibles deliver the cannabis to the body through the mouth and digestive system. People often see these products as an alternative to smoking or vaping.

Edibles can have varying effects on individuals. ResearchTrusted Source suggests that they can be a more potent method of taking cannabis than inhaling the substance.

The study showed that the effects from edibles took around 1 hour to kick in but lasted for 6 or more hours. It also showed that, in contrast, the effects of smoking or vaping tended to last 1–4 hours.

Many people inhale vaporized cannabis as an alternative to smoking it. The vaporizer heats the cannabis and extracts the cannabinoids, converting them into vapor, which a person then inhales.

There are several different types of vaporizers that use alternative methods to heat cannabis.

As scientists do not know the long-term safety of vaping it is not advisable for people to use this method for cannabis consumption.