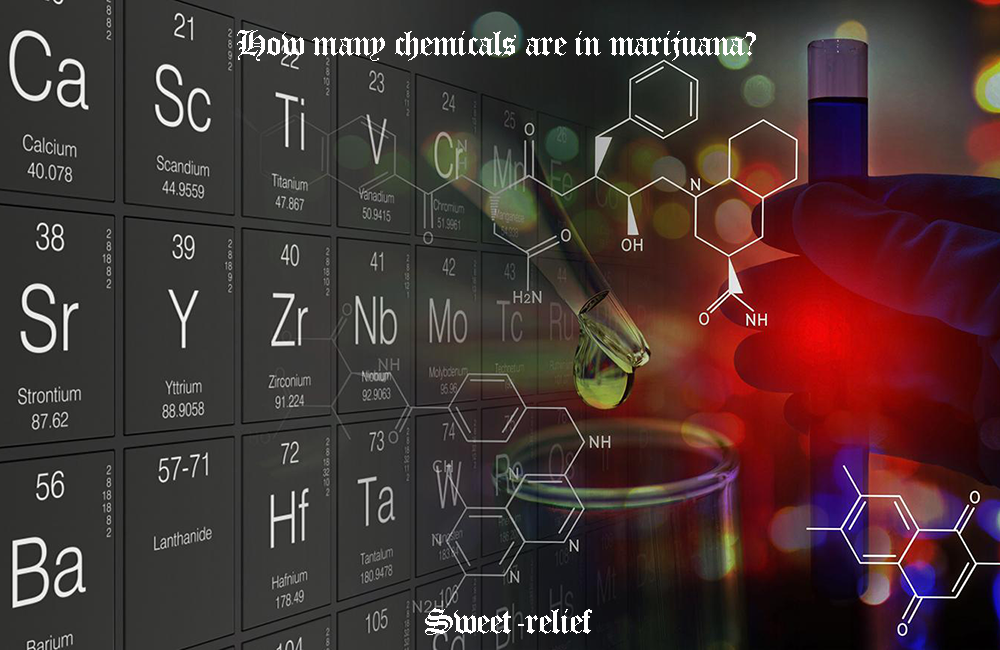 “The chemistry of Cannabis is quite complex, and the isolation and extraction of the active ingredient are difficult even today. The active agent in Cannabis is unique among psychoactive plant materials in that it contains no nitrogen and thus is not an alkaloid. Because Cannabis lacks nitrogen, the 19th century chemists who had been so successful in isolating the active agents from other plants were unable to identify its active component.

There are over 400 chemicals in marijuana, but only 61 of them are unique to the Cannabis plant — these are called cannabinoids. One of them, delta-9-tetrahydrocannabinol (THC), was isolated and synthesized in 1964 and is clearly the most pharmacologically active.

Cannabis is a complex plant, with major compounds such as delta-9-tetrahydrocannabinol and cannabidiol, which have opposing effects. The discovery of its compounds has led to the further discovery of an important neurotransmitter system called the endocannabinoid system. This system is widely distributed in the brain and in the body, and is considered to be responsible for numerous significant functions. There has been a recent and consistent worldwide increase in cannabis potency, with increasing associated health concerns. A number of epidemiological research projects have shown links between dose-related cannabis use and an increased risk of development of an enduring psychotic illness. However, it is also known that not everyone who uses cannabis is affected adversely in the same way. What makes someone more susceptible to its negative effects is not yet known, however there are some emerging vulnerability factors, ranging from certain genes to personality characteristics. In this article we first provide an overview of the biochemical basis of cannabis research by examining the different effects of the two main compounds of the plant and the endocannabinoid system, and then go on to review available information on the possible factors explaining variation of its effects upon different individuals.

Cannabis is a complex plant with over 400 chemical entities of which more than 60 of them are cannabinoid compounds, some of them with opposing effects. Cannabis is also the most widely used illicit drug in the world and its use has been associated with various mental health problems, particularly in the young [Hall and Degenhardt, 2007; Degenhardt et al. 2010]. Despite the links made between its use and the development of mental health problems, it is also known that not everyone who uses it is affected adversely in the same way. In this article we will provide an overview of the different effects of the two main compounds of the plant, as well as its effects upon different sections of the population. Before presenting the available evidence in the literature on the reasons for the varying effects of cannabis in different individuals, we will first review the present knowledge on the biochemistry of the cannabis plant and the endocannabinoid system.

CB1Rs are mainly in the brain, particularly in the substantia nigra, the basal ganglia, limbic system, hippocampus and cerebellum, but are also expressed in the peripheral nervous system, liver, thyroid, uterus, bones and testicular tissue. CB2Rs are mostly expressed in immune cells, spleen and the gastrointestinal system, and to some extent in the brain and peripheral nervous system. Interestingly, both CB1 and CB2Rs are also found in human placenta and have been shown to play a role in regulating serotonin transporter activity . Indeed further research has revealed that the endocannabinoid system also plays a significant role in various aspects of human reproduction

In the brain, CB1Rs are found at the terminals of central and peripheral neurons, where they mostly mediate inhibitory action on ongoing release of a number of excitatory and inhibitory dopaminergic, gamma-aminobutyric acid (GABA), glutamatergic, serotoninergic, noradrenalin and acetylcholine neurotransmitter systems. Because of the involvement of these systems they affect functions such as cognition, memory, motor movements and pain perception . The release of endocannabinoids, such as AEA and 2-AG, from the postsynaptic sites to the synaptic cleft occur in response to elevation of intracellular calcium and they then act as retrograde neurotransmitters on presynaptically located CB1Rs to maintain homeostasis and prevent the excessive neuronal activity. They are then rapidly removed from the extracellular space by cannabinoid transporters, often referred to as anandamide membrane transporters, which facilitate their breakdown by internalizing the molecule and allowing access to fatty acid amide hydrolase. Despite its significance in the endocannabinoid system, little is known about the cannabinoid transporters.

When cannabis is used, d-9-THC as a partial agonist binds to CB1R and acts in a less selective manner in inhibiting the release of neurotransmitters normally modulated by endocannabinoids such as AEA and 2-AG. It has been putatively suggested that it may also increase the release of dopamine, glutamate and acetylcholine in certain brain regions, possibly by inhibiting the release of an inhibitory neurotransmitter like GABA onto dopamine, glutamate or acetylcholine-releasing neurons

However, the functionalities of the CB1Rs are not always straightforward due to complex interactions with the other neurotransmitter systems. These are related to CB1Rs and CB2Rs being members of the super family of G-protein-coupled receptors (GPCRs). GPCRs sense an external molecule outside the nerve cell and by contact with the molecule can signal transduction pathways, which ultimately lead to cellular responses. External ligands such as d-9-THC, various synthetic compounds and endocannabinoids such as anandamide can activate these receptors. Interestingly some alkylamides from the Echinacea plant can also bind to the CB2Rs even more strongly than the endogenous cannabinoids. The mechanism of action for CBD is not yet clear, as this compound does not bind to CB1Rs or CB2Rs.