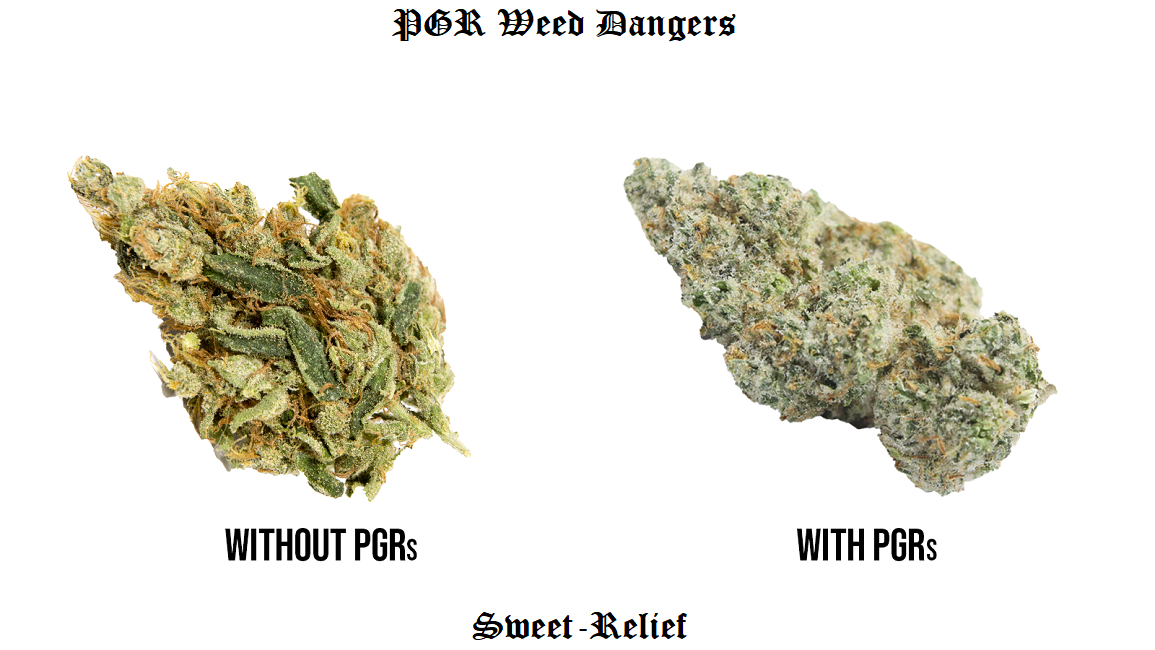 If you’re a cannabis consumer it’s likely that at some point you’ve seen buds that looked like a rock and had an odd brown or orange color, if you’ve seen something like this, it’s likely that they were grown using PGR’s. Synthetic PGR’s are human-made hormones used to promote denser flowers and make plants develop short and bushy.

Few people buying cannabis at a dispensary put much thought into the plant growth regulators that may be present in their product. While growers and producers are intimately acquainted with them, there aren’t many on the consumer end that even know what a plant growth regulator (PGR) is, or their role in a flower’s growth cycle. However, a basic knowledge of PGRs is important for anyone who enjoys weed, as there may be potential health risks involved in consuming PGRs in marijuana.

Are PGRs harmful & bad for you? Plant Growth Hormones (PGR) are a hot topic when it comes to cannabis in Australia as the illegal drug market is flooded with PGR laced cannabis buds.

Plants grow with a Plant Growth Hormone (PGH) and PGRs are a synthetic version of this to accelerate the growth of your marijuana plants.

In theory, PGRs is a good idea as your cannabis plants will develop and mature faster.

The reality is that PGRs are harmful to the plants and anyone consuming them.

What Are Plant Growth Regulators?

Plant growth regulators are naturally occurring, hormone-like chemicals specific to plants. The function of PGRs is to mimic or inhibit the expression of a plant’s normal growth hormones during its lifecycle. This includes when the plant begins to germinate, when its fruits ripen and drop, as well as the length, width, and shape of the plant’s roots, leaves, and stems.

PGRs have been used in agriculture and landscaping for nearly a century. Depending on the PGR, their use ranges from increasing the number of apples in an orchard to slowing the growth of grass in a golf course so that can be mowed less often.

Why Are Synthetic PGR’s Used?

So, most home growers won’t even want to get near PGR’s because they want to smoke the best bud possible but with some commercial growers, the story is completely different.

As you may know, some strains are naturally denser than others, for example, Indica strains usually produce denser buds than Sativas so commercial growers must adapt their growing conditions to that specific cultivar but when growing commercially, this can be a bit hard and time consuming so basically, the major factor for PGR use is increasing profits and having more product for sale in less time as possible.

As said above, PGR’s can increase bud density and shorten the life cycle so as cannabis becomes a big business, commercial growers try to increase yields per harvest and shorten growth cycles, obviously, not all growers use PGR’s but the competitive market tempts some growers to manipulate their plants to help save costs and maximize yields.

How Are PGR’s used in cannabis?

PGR’s can be used to modify most plants and are usually used to alter apple trees, strawberries, and cherries, for example, in cannabis plants, plant growth regulators and used to modify the appearance of the buds, increase yields and make the plant more uniform to better fit in indoor grow spaces.

Most common PGR’s in Cannabis

Some growers also claim that PGR’s can make cannabis plants grow healthier, stronger, and more resistant to diseases but this may not be true and most likely a lie to make cannabis consumers buy PGR grown buds and increase their profit.

So, now you know that plant growth regulators can increase yields and manipulate growth, but how do they work?

Plants use signals that allow them to respond to environmental and chemical changes, this signal pathway works in sequences of biochemical reactions, so for example, this way a cell can generate a response to a stimulus.

This stimulus consists of a receptor, and a pathway where the stimulus travels through, so when the receptor receives the stimulus, the plant will develop according to the stimulus.

Now, PGR’s will repress this stimulus, obviously, this can vary from one specific plant growth regulator to another but in general, they repress these stimuli and allow the plant to continue creating growth-stimulating genes or stop producing them.

This can also be used to manipulate the flowering stage, for example, by using these chemicals, you can induce flowering earlier or even turn off the genes responsible for plant growth to keep your cannabis plants short and stocky, which can be useful for growers who want to maximize their growing space.

Just like when manipulating plant growth and growth cycles, plant growth regulators can increase yields by activating specific genes that make cells expand. As these cells are activated, they will expand and be able to absorb more water which ends up in heavier buds.But this cell expansion comes with a downside because the extra weight is mainly made out of water and cellulose, and while the buds get bigger and denser, the trichomes production will stay the same so when comparing a regular bud with a PGR bud, you’ll get a lower cannabinoid content.

Are Synthetic Plant Growth Regulators Bad for Your Health?

Long story short: yes. Exposure to high doses of synthetic PGRs can be very dangerous to people’s health in both the short and long term. In the late 1980’s, the EPA issued a recall of Alar (Daminozide) for food uses as testing found that it could be classified as a carcinogen in high doses. It’s been banned from human consumption since 1989 and has led to several agricultural recalls. Many synthetic PGRs have been similarly banned as further tests have been done.

The EPA also has concerns that Paclobutrazol might cause liver damage, and may also affect fertility in both men and women. While Chlormequat Chloride has not yet been shown to be hazardous to people’s health, testing is still being done.