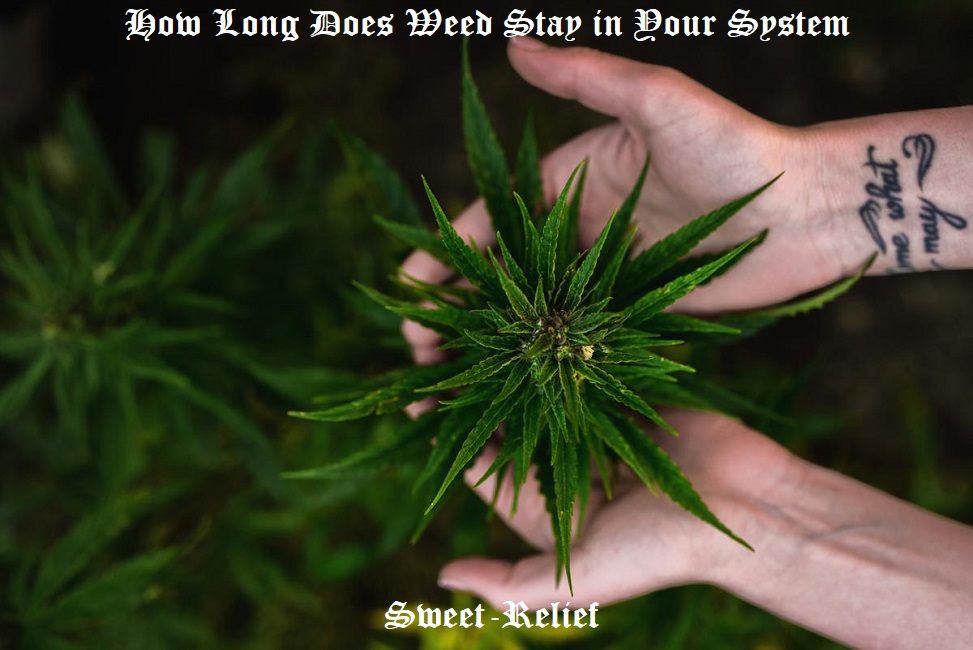 One of the most common questions we get asked as cannabis care providers is: How long does cannabis stay in your system? It’s an important question, for a number of reasons: It helps us calculate our proper dosage, gauge its effects, and—in the unfortunate event our employer institutes mandatory drug testing—to be aware of the threshold of detectability.

Keeping in mind that there are several kinds of tests for cannabis and that the results can vary from person to person, here’s what we know about this all-important question.

When we smoke or ingest cannabis, those unique plant compounds interact with our bodies. This interaction is the sole reason humans have turned to cannabis over the centuries for religious purposes, relaxation, pain relief, and recreation. This interaction also explains why cannabinoids and their byproducts remain detectable in the body and in many cases remain well after the buzz wears off.

In order to address the question, “How long does marijuana stay in your system?” we must first focus our attention on THC, or delta-9-tetrahydrocannabinol, the intoxicating cannabinoid known for creating euphoric, stoned effects. Other compounds stick around, too. But because THC remains federally illegal in the US, cannabis drug tests often exclusively screen for THC and THC metabolites, or byproducts that are produced when THC is broken down in the body.

Marijuana, also known as weed, pot, or ganja, is a medicinal plant of the Cannabis family. It contains a psychoactive compound known as tetrahydrocannabinol (THC) that has major intoxicating effects. The leaves, seeds, stems, or roots, are mainly used for intoxication purposes. Marijuana preparations are usually smoked in pipes, joints, or water pipes (bongs). Marijuana users also add it to food or brew it as a tea. Marijuana is the most abused substance in the United States. Approximately, 11.8 million young adults used marijuana in 2018.

How Long Does Cannabis Stay in Your System? The Variables

When you consume cannabis, THC—the most prevalent cannabinoid, and the one most tests are designed to detect—enters your bloodstream and is broken down into molecules called metabolites. Like its psychoactive “high,” the THC itself dissipates fairly quickly, usually within a few hours. But those metabolites stay in the body for some time, and at least one of them, called THC-COOH, is detectable days or even weeks after the cannabis was consumed.

Unfortunately, the question of exactly how long THC-COOH is detectable depends on several factors:

How often you ingest cannabis: As you might expect, those who regularly consume cannabis are more at risk of being detected, because metabolites like THC-COOH tend to accumulate over time. Those who use infrequently—like once a week or less—should be at reduced risk of detection.

Metabolism and body fat: Just as we all react to cannabis differently, our metabolism helps determine how quickly those cannabis artifacts are eliminated. Because THC is fat-soluble, in general those people with a higher proportion of body fat will retain those THC metabolites for longer.

How Long Does Cannabis Stay in Your System? Methods of Testing

This is an important question. Each method of testing—by saliva, urine, or hair—has a specific window of greatest accuracy. Given that the window is affected by the variables we named above, here are our estimates of accuracy.

This type of test—usually performed using an oral swab—yields the shortest-lived results. If you’re tested with this method, you can expect THC to be detectable in your system for 24 hours if you’re an infrequent user, or up to 72 hours if you’re a more regular one.

This is generally the most-used test method when it comes to workplace compliance. Within reason, you can expect THC to be detectable in your system:

This type of cannabis test is designed to identify chronic users. That’s good news for light or infrequent users, because there’s a reasonable chance they won’t be detected at all. But for regular or heavy users, the outlook isn’t very good, as the standard window of accuracy is roughly 90 days.

Key factors that influence how long weed stays in your system

There are a variety of factors that might affect the amount of time that THC will stay in your system.

The larger the amount of THC consumed, the longer it will take the body to break down and work through it and its corresponding metabolites.

Frequency of marijuana use

The overall duration and frequency of use have a substantial influence on the length of time that weed will stay in your system. Most research on cannabinoid detection demonstrates that THC stays in the system of chronic users far longer than one-time or even occasional users. Long-term, high-frequency cannabis use is also a notable risk factor in developing cannabis withdrawal symptoms.

Genetics also affect the length of time that THC remains in the system. For instance, people inherit different variants of the cytochrome P450 superfamily of enzymes, which modify THC levels in the body, resulting in its elimination through the urine.

The amount of fat in the body is also a significant factor. The metabolite THC-COOH is fat-soluble and binds to fat molecules, where it can be stored for a lengthy period of time. In the same vein, exercise can also impact the levels of detectable THC metabolites. When fat is burned, dormant THC from fat can be released into the blood and excreted from the body in urine or feces.

A body with higher metabolic functions can break down cannabinoids at a faster rate, shortening the length of time that THC and its metabolites will remain detectable in the body.