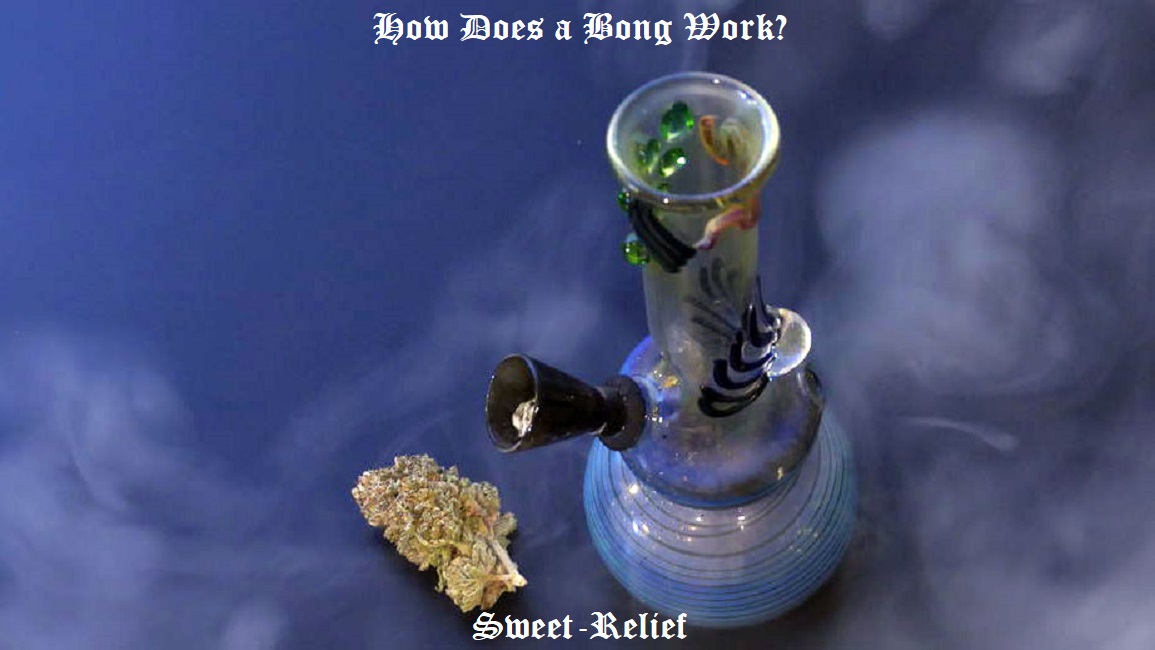 Bongs, which you may also know by slang terms like bubbler, binger, or billy, are water pipes used to smoke cannabis.

They’ve been around for centuries. The word bong is said to have come from the Thai word “baung” for a bamboo tube used for smoking weed.

Today’s bongs look a lot more complicated than a simple bamboo tube, but they all come down to the same basic process.

Read on to learn more about how bongs work and why, contrary to lore, they aren’t actually any better for your lungs than other smoking methods.

How do they work?

Bongs come in all shapes and sizes. Some are very basic with just a bowl and chamber. Others are colorful, mouth-blown works of art.

At the end of the day, they all do basically the same thing: filter and cool the smoke that comes from the burning marijuana.

Bongs generally feature a small bowl that holds dried weed. When you light the weed it combusts. Meanwhile, as you inhale, the water in the bottom of the bong bubbles (or percolates, if you want to get technical). The smoke rises up through the water and then the chamber before entering your mouth and lungs.

Are they really better for your lungs?

If you’re looking for a smoother toke, a bong will give you just that compared to smoking weed rolled in paper.

As expected, the water in a bong eliminates the dry heat you get from a joint. The effect is often described as being cooler, creamy, and smooth rather than harsh.

This effect can be deceiving, though.

While the smoother smoke might feel better on your lungs, you’re still smoking. And that smoke is still filling up your lungs (we’ll spare the lecture on why this is all-around bad news for your health).

Sure, a small amount of the bad stuff might get filtered out. But it’s not enough to make much of a difference.

Yes, this means all those stories about bongs being the “safer” way to smoke are largely based on junk science.

So far, bong safety has been pretty low on the list of priorities when it comes to medical research. But as cannabis becomes legal in more areas, this could change.

How a Bong Works

The basic concept of the bong is to cool the smoke being inhaled by passing it through one or several chambers filled with water or ice. The more contact the smoke has with the water, the cooler and smoother the smoke. Although these devices vary in size, shape, and complexity… the one thing they all have in common is delivering a pleasantly refreshing smoking experience.

A bong consists of 5 pieces:

Many bongs today come with an ice pinch in the tube. These “pinches” in the glass, usually located at a mid-point or near the top of the tube, prevent the ice cubes from falling into the water (at least until they melt small enough to fall through). This additional filter of ice provides another cooling level before reaching the smoker’s mouth.

The best strains of all time

Why Use a Bong? The Benefits of Percolation

There is no denying the distinctive sound of a bubbling bong, but there is science behind that beloved gurgle. Although the level of filtration acquired is debatable, studies are promising that passing smoke through water helps to filter some of the toxicants that may be inhaled while smoking. With other smaller devices, such pipes, cigarettes, or joints, the smoke is not filtered which allows small particles, toxicants, even burning embers to pass into the smoker’s mouth, esophagus, and lungs, potentially causing damage over time. Using a water pipe, as the smoker inhales, the smoke travels through the water trapping particulate matter, as well as, commingling with clean air and water vapor, which essentially expands the smoke. As more bubbles are created, the more the smoke expands, and the smoother and cooler the hit.

With this in mind, there are many different types of percolation filters found in bongs today which are engineered to provide better air flow and produce a better smoking experience. These are but a few of the most popular types of percolators:

Chambered bongs are the best type of bongs for ensuring a clean and smooth hit. They come in many styles and fun designs and are generally referred to as multi chambered bongs. The chambers are equipped inside of the bong itself and is stacked on top of each other. Each chamber contains a separate water chamber to amplify the filtration process depending on the amount of chambers there are.

This provides the highest smoke filtration as the smoke is filtered not through just one water chamber instead double or sometimes triple the amount. This allows the smoke to be filtered back to back through the slits and holes as it moves in an upward direction.

There are numerous styles and designs for percolator bongs as well. Similar to multi chambered bongs, percolators work alongside these chambers in helping the smoke that is traveled in it to be efficiently cycled before reaching the chamber. It to, has many slits and holes for extra air flow and circulation which allows the smoke to cycle in a circular like motion creating a large amount of bubbles, resulting in an cleaner and cooler feeling rip.

An example of a unique percolator design would be a triple matrix perc bong. This has three levels of independent water chambers and each of these chambers have a very highly efficient percolator, which enables an optimally balanced smoke diffusion and water filtration to take place within the bong.

Recycler bongs are very unique pieces simply because of the type of design and how it filters smoke remarkably well. Typically, a recycler bong possesses a two chamber system that recycles water through a loop like motion.

The looping of the water filtration allows for less time for the vapor to come in contact with air. How does this benefit your experience? The longer smoke is interacting with air molecules, the more stale your smoke will become, as a result, it reduces the amount of dryness in your hit. The loop also acts as a natural splash guard, making it nearly impossible to let water hit you. By using a recycler, not only are you getting the most optimal smoke filtration but you’re getting the smoothest and tastiest hit out of your bong piece.