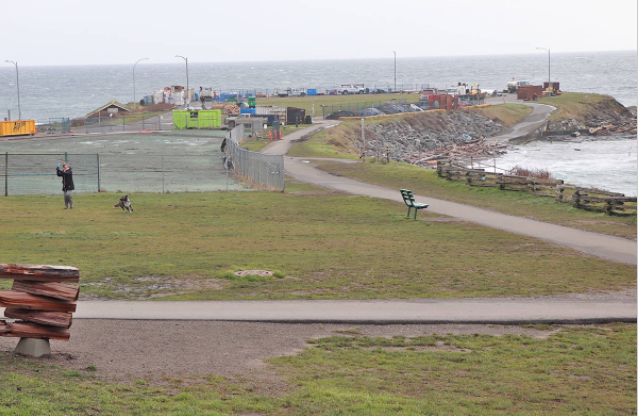 The option approved by council, sitting as committee of the whole, will cost up to $275,000 and see only part of the loop closed to vehicle traffic. In response to a significant number of calls to keep the area the same as it was before construction began on the Capital Regional District sewage pump station project, a section on the boathouse side of the loop will remain open to vehicles and include eight regular parking spots, six accessible spaces and a vehicle turnaround area.

The site will include 25 parking stalls, 10 of them accessible, a large loading area at the top of the loop. It will create 2,400 square metres of new pedestrian-only space on the waterfront.

“I think it will allow for an improved pedestrian realm for people such as children (and) seniors, but also preserve some opportunities for driving to Clover Point,” said Coun. Ben Isitt.

He later supported the “frugal approach” brought forward by Coun. Geoff Young. That found cost savings by limiting painting in the pedestrian zone to delineating pedestrian and bike trails, rather than including various pavement play features. A suggestion to eliminate the chairs and other placemaking items to further reduce costs was not approved, after staff noted such portable items could be moved anywhere as needed in the city.

Coun. Charlayne Thornton-Joe saw support for her amendment to keep the Follow the Pod public art whale feature formerly installed in Centennial Square (currently in storage) at a downtown location rather than installing it at Clover Point.

Thomas Souliere, director of parks, recreation and facilities, emphasized the short-term nature of this treatment, calling the long-term plan for Clover Point “one of the most important projects the city undertakes.” Based on other major parks projects ahead of it on the schedule, the public engagement process is due to happen in 2023, he said. A two-year design process would follow, then construction.

“I do think something has to be done with Clover Point that’s different than simply leaving it as it is,” said Coun. Marianne Alto during discussions. As did others at the table, she voiced uncertainty that the paint treatments on the pavement were what the public wanted or would use.

Parks staff had recommended a full loop closure, which mirrored its Feb. 11 recommendation, but called for six more accessible parking spaces up the hill, bringing the total to 10.

“This is not urgent in my mind, this is not a crisis, it’s not as if we need to make a decision today about the future of our city,” he said, emphasizing a preference to wait for the extensive public consultation on the site scheduled for 2023.

No schedule was released of when the work would start. Watch victoria.ca and vicnews.com for ongoing news about the project.