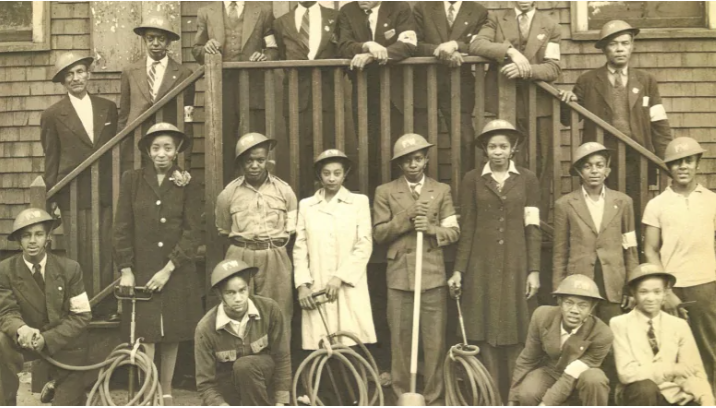 A woman in Eastern Passage, N.S. has come forward saying her great-aunt was a fire warden in photo

A sepia-tinged photo of an all-Black volunteer fire brigade posing around a Halifax doorstep during the Second World has sparked a flurry of online sleuthing to identify the 16 men and three women featured.

The young women wear dresses and top coats while the older men and teenaged boys are in suits and ties or a uniform. The women are each holding a pump attached to a hose. All are wearing helmets and arm bands signifying they’ve volunteered to protect their neighbourhood if fire broke out while firefighters were off fighting in the war.

An enlargement of the artifact is part of an exhibit entitled Halifax Citizens in Action at The Army Museum at Citadel Hill, Collections manager Chara Kingston said the narrative behind the “gorgeous photograph” is incomplete without putting names to the faces.

“You can look at anything, whether it’s a pair of boots or a piece of paper, and it doesn’t really have context until you start to dive into the story,” said Kingston, who put a call out on social media this week asking people to help identify the members of the civil defence platoon.

“I want to crawl inside that photograph and really get to know some of those people in those faces,” she said.

It’s believed the photo was taken in 1943 on what’s now called Buddy Daye Street. At the time, city residents were enduring food rationing, air-raid sirens, and the fear of war coming to the port city.

It was also a time of racial segregation, and decades before the north-end Halifax neighbourhood became gentrified.

Kingston added #BlackHistoryMonth to her post in hopes of attracting more eyeballs.

Missy Searl, of Eastern Passage, N.S., is a former employee of The Army Museum. She immediately noticed the woman in the middle bore a strong family resemblance.

“I was staring at it and looking at it, and I was like, the lady in the white coat looks really familiar. And I messaged my uncle Wayne Adams, and I said, ‘Who is this lady?’ And he said, it’s your Aunt Pearl,” said Searl.

Pearl Brown, Searl’s great-aunt, was likely in her early 20s in the photo.

“It was kind of like this really beautiful surprise to see this woman who obviously my aunt looks so much like, you know, as she grew older,” said Searl.

The president of the Halifax Fire Historical Society, Jeff Brown, said the civilian fire wardens were part of the Air-Raid Precautions Group, which was formed by the federal government in 1939 and disbanded in 1945.

In Halifax, two captains provided training to the brigades. Brown said the civilians who signed up to defend their neighbourhoods deserve to be saluted for their efforts.

“It’s just another form of a call-to-arms, basically you’re there for your community, much like our volunteers today,” said Brown. “That’s kind of what we do, it’s human nature to want to help, for the most part.”

This is not the first time detective work has been done to identify the people in this picture.

Unbeknownst to The Army Museum staff, Cyril Clayton, a retired chief warrant officer in his late 70s and a board member of the museum, recently spent time on the photograph and the names. He said they’ve all been identified as members of Platoon 7 Section E.

Searl posted her discovery on Facebook and already a friend has come forward saying her relative is also in the photo.

Kingston is hoping descendants from everyone in the photo can be brought together.

Searl said that would be amazing, and already this endeavour has left her feeling “empowered.”

Her great-grandfather was a member of Nova Scotia’s Second Construction Battalion, the only all-Black battalion in the Canadian military history.

Now she has learned about another ancestor who also showed bravery at a time of turmoil.

“This is a woman that is part of my makeup, my genetics,” said Searl. “It’s things like this that I always go, ‘OK, so this is who I’m descended from.'”