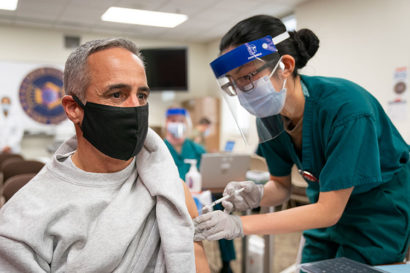 ‘We were eager to start as soon as possible,’ says head of Laval regional health board

Two weeks away from the COVID-19 pandemic’s first anniversary, the province’s COVID-19 vaccination campaign is entering a new phase.

The general population is now able to schedule appointments to get their shots, and in some parts of the province, get their first dose by the end of today.

The vaccination site at the Quartier Laval shopping in the Chomedey district will be open, with two more sites in the city set to open in the coming days.

“All these shopping centres have been rented for a while, workers were hired and then we were waiting for the vaccines, and now they’re available.”

Trépanier expects about 400 people to get their shots today, with the daily total expected to go up with more time slots becoming available.

Up until now, vaccine doses had only been given out to residents in long-term care homes, private seniors’ residences and health-care workers. More than three months have passed since the first doses were given out.

“We’ve been working very hard for the last year,” Trépanier.

“We are going to recall every event that happened in that period, and so of course, this is [very meaningful] for me and, of course, for all of my colleagues, and probably a lot more in the population.”

For now, only Quebecers born in 1936 or before are eligible, and although they can book their appointments by phone at 1-877-644-4545, the government is strongly encouraging them to reserve their spot online atquebec.ca/covidvaccine.

Some exceptions will be made, allowing people born no later than 1951 to get the vaccine if they live with someone who’s already eligible, or if they are their primary caregiver.

Since the province began administering COVID-19 vaccines on Dec. 14, about 380,000 Quebecers have gotten shots, accounting for about four per cent of the population.