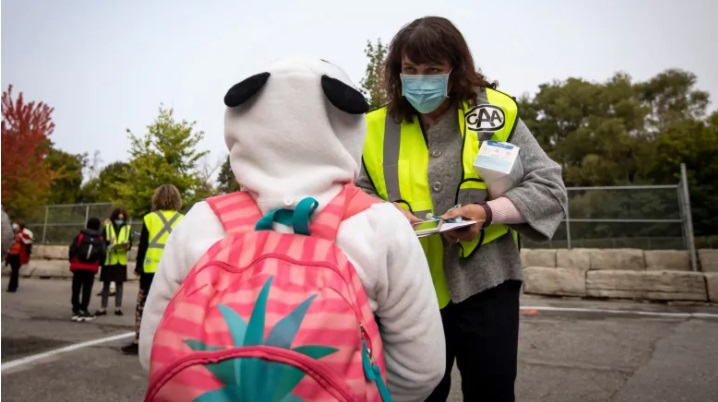 As students across the province return to in-person classes, the Ontario Ministry of Education says 624 of the 625 positions for public health nurses at schools have now been filled — but they each have to cover multiple schools and some critics question whether that’s enough to keep kids safe during the pandemic.

Last August, the province announced it was hiring 500 public health nurses, and announced an additional 125 would be added in September.

“These nurses play a pivotal role in supporting communications between [public health units] and local school communities, and will continue to play a role in our ongoing partnership to support healthy and safe school environments,” said Caitlin Clark, spokesperson for Education Minister Stephen Lecce.

The Ministry of Education says it provided $62.5 million dollars to public health nurses to fill the 625 nursing positions.

Because the nurses are responsible for multiple schools, they won’t be physically present every day. Instead, they’ll serve as an educational resource for staff, students and parents on ways to implement COVID-19 measures safety. While their addition is being welcomed by staff and teachers, some are calling on the province to do more to ensure schools are safe.

‘Every day is very, very different’

The Ministry of Education said the nurses have contributed to COVID-19 infection prevention and control assessments in more than 3,000 schools.

“A lot of the work I do is doing proactive visits and reactive visits for [infection prevention and control] support,” said Austin White, a public health nurse on the school health team with Niagara Region Public Health.

White said he’s been especially busy since Feb. 8 when classes in the region where he works returned to in-person learning.

“Every day is very, very different. But I get a lot of calls from my schools asking about basic questions about mask usage, and physical distancing and screening. And if there are cases within schools I get pulled to do reactive visits within schools.”

Regina Elliott, who manages public health nurses in the Durham region health department, said contact tracing is a big part of what those nurses do.

“The nurse works with the principal in attaining alignment, let’s say, for the classroom. Or if there’s a bus involved, or a seating plan. It’s doing an assessment of who would be close contacts, who would be dismissed from school and needing to self isolate,” said Elliott.

The head of the Registered Nurses Association of Ontario (RNAO) is pushing for these positions to continue beyond the pandemic.

“The initiative has demonstrated to be quite successful — so much so that we’re asking that these become permanent positions,” said Dr. Doris Grinspun, CEO of the RNAO, who added that the impact of COVID on children will continue for years to come.

The ministry hasn’t indicated plans to make the positions permanent.

While the province says the nurses play a key role in planning, preventing and responding to COVID-19, some teachers maintain that isn’t enough, with in-person learning now resumed across the province.

Sam Hammond, president of the Elementary Teachers Federation of Ontario, said while he supports the addition of public health nurses, more is needed.

Hammond said when the province first announced the addition of public health nurses, many teachers believed they’d be physically present on a regular basis in schools to assist. In reality, there are 4,825 publicly-funded schools in Ontario, meaning many public health nurses are responsible for multiple schools.

The additional support is always welcome,” said Hammond in response to the province filling the 624 nursing positions, but said many of his members don’t interact with them.

“We would rather have, quite frankly, seen that money or the amount of funding for that or part of that funding to go toward reducing class sizes which is an immediate on the ground safety precaution.”