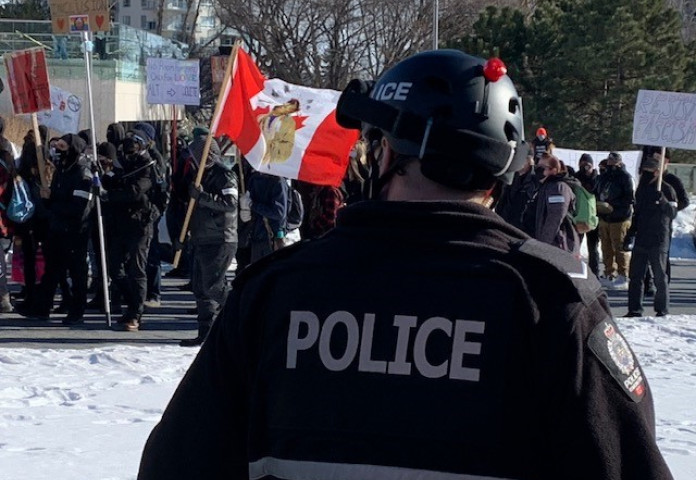 EDMONTON — The convergence of people protesting everything from Alberta’s COVID-19 restrictions and the imprisonment of local church pastor, to racism, at the provincial legislature on Saturday was a tense meeting that ended with at least one person in police custody.

The crowds began to gather around 2 p.m. when an anti-racism rally was scheduled to take place.

Within hours, a group called Walk for Freedom protesting COVID-19 public health measures had marched to the government grounds, those at the front carrying a banner that read “protecting our civil liberties” and burning torches.

Alberta Sheriffs and Edmonton police both attended the scene, the latter helping to keep the two sides separate.

However, one man was arrested – for causing a disturbance, according to EPS – to the dismay of his supporters.

“Nazis. That’s what you people are,” an onlooker shouted at the officers.

The man was not charged and released later.

Many of the anti-lockdown speakers voiced support for Pastor James Coates of GraceLife Church near Edmonton, who was arrested earlier in the week when the church continued to hold Sunday services that police allege violated COVID-19 restrictions.

Prior to the demonstration, supporters said prayers outside the Edmonton Remand Centre where Coates has been remanded in custody for refusing to agree to bail conditions.

A sign carried by one demonstrator said “Free the Preacher, Jail the Premier.”

As of late Sunday morning, Alberta Premier Jason Kenney had not publicly commented on the Saturday events at the legislature, but did tweet twice about unrelated matters. CTV News Edmonton has reached out to his office for comment.

“Many in attendance then lit torches and proceeded to march around downtown Edmonton. These marches are intended to intimidate, they intend to spread hate,” she wrote in an online post. “This wasn’t about COVID-19. Demonstrations of white nationalism are a real threat and we must confront that threat.”

Torches have been used throughout history by racist and white supremacist groups, including Nazi Germany, the Ku Klux Klan and, more recently, demonstrators at the white nationalist rally in Charlottesville in 2017.

Former Liberal minister and MP Amarjeet Sohi said, “Torches invoke racism, violence & destruction. Those carrying them in #yeg today symbolize hate. Freedom is a façade for their evil. And complacency from those in power is a choice.”

“Covid-19 is not a joke nor a hoax. We are in the middle of a global public health crisis. Wearing a mask and following other public health measures keeps people safe and saves lives,” he wrote.

“I’ve also been made aware that some people associated with this rally, which is being led by organizers from outside Edmonton, may be associated with known hate groups. Edmonton unequivocally condemns racism, misogyny and other forms of hate – such speech is not welcome in our community.”