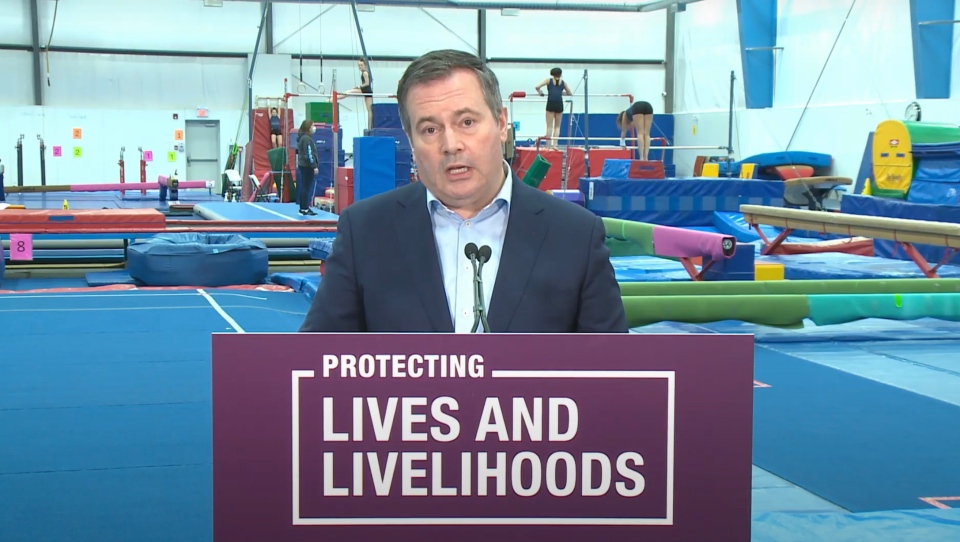 EDMONTON — Alberta’s premier announced Wednesday $120 million in support — up to $10,000 per small or medium-sized business — for those hard hit by COVID-19.

Speaking at the North Edmonton Gymnastics Club, Jason Kenney said the payment can be used to offset costs associated with the pandemic including purchasing personal protective equipment, paying bills and hiring staff.

“The new enhanced COVID-19 business benefit that we’re launching today, we’re announcing today, will ensure those businesses hit hardest by the pandemic continue to have access to critical support to help them survive this crisis,” he said.

To access the funds, businesses must demonstrate a revenue reduction of 60 per cent or more. Those that do so can receive 15 per cent of their monthly revenue up to a maximum of $10,000.

“This will help us continue because we don’t know what’s going to happen,” said Lynda Armstrong, executive director of the North Edmonton Gymnastics Club. “We continue to work through these pressures of these new costs and we reinvent our programming and rotation schedules to keep everyone safe.”

A news release said the benefit is intended to provide additional help where federal programs fall short so businesses are required to report the total amount of provincial and federal support received, to ensure no more than 80 per cent of revenue is covered.

The benefit will replace the Small and Medium Enterprise Relaunch Grant program which provides up to $20,000 to businesses that lost 30 per cent of revenue due to the pandemic.

Kenney said the higher threshold for the “enhanced benefit” is to ensure those most in need get help.

“For example, certain aspects of the hospitality industry, event venues, obviously gyms continue to be really hard hit,” he said. “It made sense for us to focus future financial support on the hardest hit, those who have lost the most because these restrictions.”

The province said the eligibility requirements will be announced closer to the program’s launch date in April.

But to the owner of a Calgary mental health practice — which she estimates lost 80 per cent of its clientele when the office couldn’t be made safe for reopening and moved online — the announcement of aid is vague and likely appears more helpful than it will actually be.

“What’s the time period to show the losses? And who has a 60 per cent loss at any point that, first of all, is still in business? And second, is generating the kind of revenue that 15 per cent of that monthly revenue is going to be any sort of meaningful amount of money?” Cultivate’s executive director Jess Roos asked.

Her frustration is rooted in the fact it took her until Wednesday to receive the second half of the funding she applied for under the first relaunch grant when it opened Dec. 14. Roos considers herself lucky to have known how to follow up on the process, and had the time to do so, for weeks.

“I’m flabbergasted by, honestly, the criteria to receive this much smaller amount of support. I think the announcement made it sound more supportive than it actually is.”

Kenney said the point of announcing the program on Wednesday was to “give as much notice” to businesses as possible.

Businesses can still apply for the Small and Medium Enterprise Relaunch Grant program until the end of March. According to the government, the program has provided more than $350 million to 50,000 employers.

Following the announcement, the Canadian Federation of Independent Business (CFIB) said it was “disappointed” to learn businesses would have to wait until April 1 to apply for additional relief.

In a news release, it states that while the funding is appreciated, it is needed now.

“It’s mind-boggling why the Alberta government is asking the hardest hit small businesses to wait until April for additional support when an existing program is in place to roll out funding now,” said Annie Dormuth, Alberta provincial affairs director for CFIB. “This move makes no sense, and does not reflect the realities of small businesses, many of which are barely hanging on.”

The CFIB pointed to its survey results from earlier this month that show 97 per cent of businesses in the hospitality sector said they needed additional provincial support and 57 per cent said they were at risk of closing.

The Alberta average showed 65 per cent of businesses said they needed extra provincial support and 22 per cent were at risk of closing.