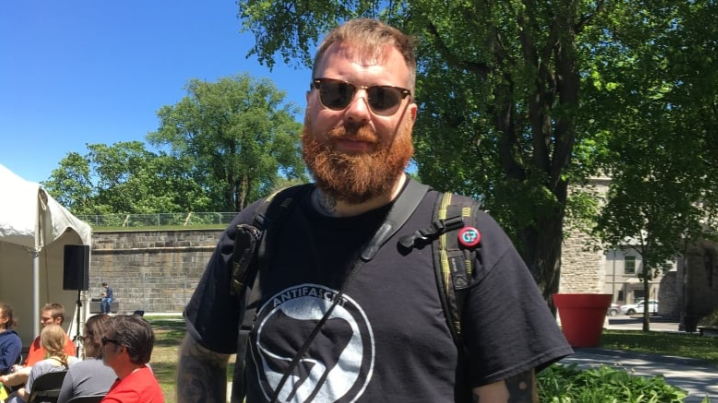 Barry Conway, 34, is charged with assaulting the leader of a group that crashed the Pride festival

A local union leader will face trial next month on a charge that he assaulted the leader of a group that crashed Hamilton’s 2019 Pride festival.

Barry Conway, 34, is charged with assault following a fracas at the June 15, 2019 Pride in the Park event at Gage Park.

At that festival, a group of self-appointed street preachers — some associated with the Proud Boys, a group designated earlier this month by the federal government as terrorists under the criminal code, and a yellow vest group that regularly gathered in front of city hall — arrived bearing homophobic signs and a loud speaker.

Another group of people with their faces covered in pink masks — most associated with a local anarchist social space The Tower — used a portable curtain to block the original group from view. Violence broke out and several people were injured.

In a statement this week, Marsha Kauffman, spokesperson for a group called the Pride Defenders Solidarity Committee, said Conway will face trial on March 15. Charges against two other people have been withdrawn.

Conway, who represents City of Hamilton outdoor workers, “is a long-time labour activist who stood by the queer community at Pride, like he has with many other groups facing oppression,” Kauffman said in the statement, calling the ensuing trial “a pattern of political repression in this city.”

“The CUPE 3906 executive stands in solidarity with Barry and all the Pride comrades,” it said, citing “ongoing persecution” of the “LGBTQ2SI and anarchist community.”

The altercation at the Pride festival has had wide-reaching implications.

Chris Vanderweide of Kitchener, who was on the side of the self-appointed street preachers, pleaded guilty last year to assault with a weapon after hitting people in the face with a helmet. He received a one-year suspended sentence.

Another person Hamilton Police Service initially cited as being at the event was arrested for violating parole, but was later found to not be at Pride.

The Hamilton police services board, meanwhile, ordered a Toronto lawyer to do an independent review of the police response at the event.

Scott Bergman said the response was “inadequate” and added to “distrust of police in some circles.” He also said that the counter-protest wasn’t just anarchists.

“Many Pride attendees who have no affiliation with The Tower were present and confronted the agitators with colourful signs containing messages of love and acceptance,” he wrote.