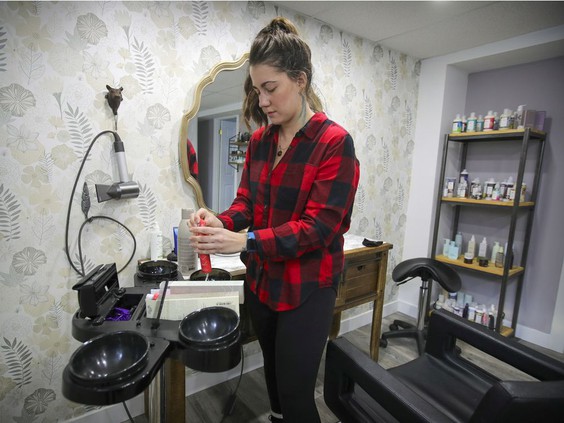 For a decade, Kristyne Tardiff poured her heart and soul into a business on Montreal’s South Shore. In a fraction of that time, the coronavirus ripped it out from under her.

“Everything was going super smoothly, and then COVID hit,” she said.

Tardiff’s place of business was one of many casualties amid the pandemic, but what made it all the more difficult for her was the personal loss she faced at the same time, including an eviction and the deaths of her grandmother and grandfather.

Tardiff owned Chic et Rustic, a salon offering a range of aesthetic services in St-Hubert. She ran the show by herself at first, but by the time COVID-19 rolled around, a total of four self-employed women worked out of the space.

A few weeks before the lockdown was announced, the two hairdressers renting space in Tardiff’s salon decided to pause their services. Tardiff began to struggle to pay her rent, especially because there weren’t any viable options of financial relief for people like her when the pandemic struck, she said.

When Tardiff was able to get help from the government, it was hardly enough to cover her expenses.

“They don’t think of the people who live alone that don’t have two incomes coming in,” she said. “That caused a really big issue for the salon because none of (the other hairdressers) wanted to pay rent. I didn’t have enough money to pay rent.”

She was able to strike a deal with her landlord for a couple months, but in the end, the hairdressers decided they didn’t want to pay up until they were back up and running in the salon.

Tardiff was forced to leave the space she’d carefully crafted for Chic et Rustic in September.

“People were shocked, pissed off, you name it,” she said of the clientele she built up over the years.

During the time Tardiff spent struggling to keep her business afloat, she lost her grandmother in Vancouver to COVID-19.

“It was just very sad and unfortunate in the sense that everyone dies alone,” she said. “In Vancouver, there was no choice — my grandfather watched his wife die through a window, and then we received her ashes in a Ziploc bag.”

Tardiff explained cremation was the only option in Vancouver at the beginning of the pandemic because of the unprecedented number of deaths.

“There’s so many people dying that they just threw her ashes — and we don’t even know if it’s her ashes — into a Ziploc, sent them to my Dad because she wanted to be buried here.”

Tardiff’s grandfather also passed away last year, alone at a hospital in Longueuil. His wish was to donate his body to science, but the threat of COVID-19 made that impossible, despite the fact the virus wasn’t what caused his death.

For Tardiff, it was a time characterized by pain, anxiety and loss.

“Just the idea of the grocery store — I was getting panic attacks, I would cry in my car and I would freak out because I have a lot to lose,” she said, adding her mother is at-risk of developing complications from COVID-19.

But it was also a time of new beginnings. Tardiff was able to purchase a house with some of the money she inherited from her grandparents, and while waiting for Quebec to allow salons to reopen, she took up a number of new hobbies.

“I actually took a photography course online and I’ve done a few contracts on the side during COVID because photography was allowed,” she said.

She also took up macrame and began refurbishing furniture.

“I’ve done about two pieces (of furniture),” she said.

Now that personal-care services are allowed to operate in Quebec, Tardiff has begun taking clients in her home, where she follows public health guidelines to a T.

While the road that brought her to this point was gruelling, Tardiff said she had a solid support system in her parents, who were able to help her out a bit financially.

“I don’t like it and I get upset and anxious about it, but they’re like ‘Kristyne, it’s not like you’re not succeeding, it’s just a pandemic, at this point in time we all need to help each other out where we can, and if it’s money for you, we’ll do what we have to do to keep each other afloat.’ ”