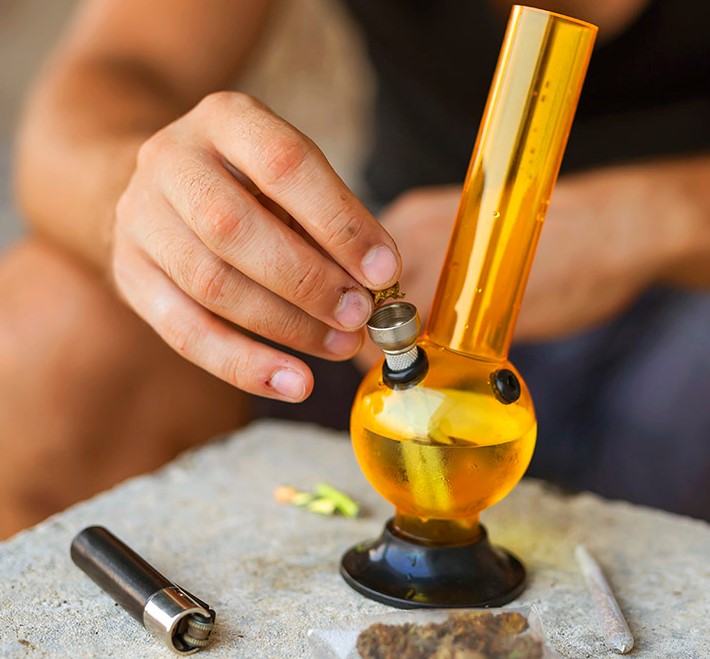 A water pipe known as a bong is used to smoke cannabis. It cools the smoke, making it smoother and less harsh.

A tube rises from a base in modern bongs. Water is held in the base, which has an angled hole to accommodate a downstem. Smoke is channeled down into the base through a chilled drink of water before rising up into the tube and out of the mouthpiece, into the smoker’s lungs. The mouthpiece sits outside of rather than inside a person’s mouth.

Bongs, on the other hand, are sometimes marketed as “For tobacco use only.” They come from areas where cannabis smoking traditions have been practiced for millennia before the introduction of cigarettes.

History of the bong

Bongs are said to have originated in Thailand, Laos, China, or even Northern Africa. Regardless of the bong’s origin, historians think that it has been around for centuries if not millennia, and that it entered the West following the cultural exchange I

The term “bong” first appeared in Western writing in a 1971 edition of Marijuana Review, according to numerous blog entries. Others claim that 17th-century travel writers used the term.

According to a story in the alternative newsweekly The Stranger in Seattle, Washington, local glassblower Cameron Tower created the contemporary glass bong while working as an apprentice under heady glass creator Bob Snodgrass in Eugene, Oregon. According to the article, a water-filtered hand pipe sounds similar to what we’d term a hammer bubbler today—and despite its popularity, it’s a disputed account.

Refuting the claim that Tower, proxy Snodgrass, kicked off bongs in the ‘90s, UK-based writer and cannabis blogger Richard Gregory cited a July 6, 1972 issue of Rolling Stone, which features a full-page advertisement for a glass bong called “The Toker.”

Yet, it’s still unclear who first translated clay and wood bongs into glass.

Benefits of using a bong

People mainly use bongs for water filtration, or to cool smoke, going so far as to add ice cubes or specialized features like frozen glycerine coils.

Others say bong hits get them higher than a standard pipe or joint because of the volume of smoke in a bong rip.

By making smoke easier on the lungs, a person can inhale more smoke in one go.

The jury is still out as to whether the water in a bong filters out toxins, carcinogens, and irritants from smoke. More research needs to be done on this.

What is the difference between a bong and a water pipe?

Bongs are a type of water pipe; they are vertical in design and the mouthpiece goes over your lips.

Bubblers are water pipes that feature a mouthpiece that goes between the lips. Therefore, we think of them solely as water pipes and distinct from bongs.

Are bongs and dab rigs the same thing?

Like bongs, dab rigs utilize water filtration for cannabis consumption. The difference between the two is that a bong uses a bowl piece for combusting flower, while a dab rig has a nail, or banger, for vaporizing oil, or dabs.

Additionally, dab rigs tend to be smaller and move vapor through multiple chambers and percolators, the vapor embarking on Dr. Seussian paths along the way to your mouth.

It should be noted that any bong can be used for concentrate vaporization if the bowl piece is swapped for a nail, or banger. Yet bongs aren’t optimized for concentrate consumption and purpose-built dab rigs are recommended.

What are the different types of bongs?

Bongs differ in size, shape, functionality, and construction. Some feature percolators for diffusing smoke, ice catchers for cooling a hit, or constrictions that create pressure differentials and thereby reduce the temperature of a rip.

A growing number of bongs veer away from utilitarian design and are visually distinct, colorful heady pieces that might fit into a home’s decor. As cannabis culture matures and incorporates larger audiences, so too do our smoking devices.

The straight tube is one of the most basic bong designs. As the name suggests, it consists of a straight glass tube, outfitted with an angled hole to accommodate a downstem.

The downstem accepts a removable bowl piece on one end and is submerged in water on the other, filtering smoke through cool water before traveling upward.

An ice catcher is a common added feature. Basic ice catchers are three indentations, or ice pinches, mid-way up the tube, designed to hold ice cubes above the water. Smoke travels up from the water and past the ice to further reduce the temperature of a hit.

The first commercial Westernized bongs were made from modified scientific glass instruments. Laboratory beakers were favored by some for their heavy bottoms, making them less prone to tipping over compared to straight tubes inspired by the graduated cylinder.

Beakers usually have a triangular base that turns into a tube, but can become complex with the addition of smoke-diffusing percolators, which further cool smoke, and other features.

Percolators can take many forms. Some are composed of just a few slits at the end of a flat-bottom downstem, while others look like tiny chandeliers suspended inside the neck of a bong.

Today, beakers are still a favorite, as is evidenced by the wide array of companies producing the ergonomic and effective staple without significant changes over the last 20 years. A design for the ages, the beaker laid the groundwork for countless iterations of bongs.

The term “scientific glass” refers to pipemaking practices that rely on science to engineer an improved smoking experience. This is where glassblowing know-how and science meet.

Features like constrictions, Venturi chambers, and percolators hail from the scientific glassblower’s bag of tricks, most of which aim to cool and filter a hit. If smoke whips into a tiny tornado or circulates between multiple chambers and water features, it is the technical knowledge of a scientific glassblower you have to thank.

Scientific glass bongs and dab rigs have pushed the pipemaking medium forward in the past 20 years to create precision-made specialty products.