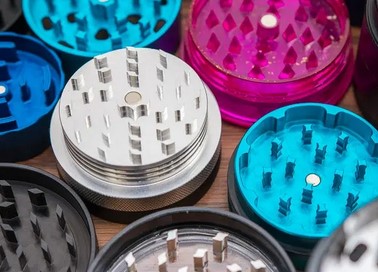 Whether you infuse your marijuana into edibles, you vape or smoke, preparing your buds first with the help of a grinder will make the most out of your overall experience. Definitely, the marijuana grinder is one of the few essential tools every cannabis consumer needs to have.

If you’re new to the weed world, you probably have a few questions about what weed grinders are, how they work, and why you would want to use one. This is an in-depth guide on grinders which will teach you the basics you need to know about marijuana grinders to get you started.

Grinders are usually circular, resembling a puck, so they can be rotated to break down weed (as in the image above).

They can be made out of a variety of materials:

Grinders also come in a variety of sizes, usually from 2” in diameter to 6”. With a small grinder, you’ll have to do multiple loads to break down a nug, but they are portable and easy to throw in a backpack.

Bigger grinders can break down more nugs in one load and can have more leverage, making it easier to break down any amount of nugs, but they aren’t as portable.

The most common type of grinder is a four-piece metal grinder. The four pieces are:

Other types of weed grinders

Grinders can also come in two-, three-, and five-piece versions. Two- and three-piece types don’t have kief catchers and gum up easier because the kief isn’t separated out. Five-piece grinders either have two storage chambers or two kief catchers.

What is a Marijuana Grinder?

A grinder is a device used to make the process of grinding marijuana faster and simpler. It helps grind nugs into fine pieces that most users prefer for rolling joints and blunts.

The classic cannabis grinders are palm-sized cylindrical-shaped looking tools consisting of metal teeth that are revealed once you separate the two interlocking halves, top and bottom. These teeth are designed to shred and cut dried cannabis into small bits.

Sometimes called “bud grinders,” herb grinders come commonly in Three-piece designs, including a grinding chamber, a lid and teeth or pegs for grinding. Four-Piece designs make it easier to remove your dry herb after it’s been ground since they come with additional chambers and screens.

Grinders can be ordered online in a wide variety of colors, materials and design. They can also be purchased at almost every smoke store or head shop.

Why Use a Grinder for Weed

Breaking up a large amount of weed is much faster and cleaner thanks to grinders. Investing in a good herb grinder offers several advantages even if  some cannabis consumers are too tempted to use their hands to pull apart and grind their marijuana.

Using your hands to break up marijuana results in irregular sized pieces leading to uneven heating or burning. Conversely, a grinder is designed to shred dry marijuana flowers into an uniform consistency every time due to its carefully placed teeth.

Marijuana grinders are also set to separate and collect kief from your herbs. Dry herb consumers value kief’s high concentration of active botanical compounds, so its an added benefit to have a kief catcher. This allows you to collect kief in the bottom of your grinder and later add it to your joint, edible recipe, vaporizer or pipe.

Another disadvantage when using your hands is that it is almost impossible to catch the kief that falls off the bud while pulling it apart. These small bits of cannabinoid and terpene packed trichomes will end up everywhere because when you use your hands, the kief becomes a sticky resin on your fingers due to friction.

Weed grinders improve the effectiveness of your vaping, smoking, or cooking sessions and save you money preventing any unintended loss of marijuana.  They also preserve the integrity of your weed as hands transmit natural skin oils causing deterioration of the resin left on your herb.

How To Use A Weed Grinder

Step 1: Open the top lid. Only if necessary, use your fingers to break bigger chunks up and place them in between the grinder’s teeth and not the edges of the grinding bowl. It is useless to put any nugs directly in the center since this is where the magnet pivots are. Nothing in the center will get shredded.

Step 2: Put the top of the grinder back on and give it about 10 rotations clockwise or counterclockwise. Do it until all the bud falls through the holes or the grounded herb is your ideal consistency. Now remove the top and hit it gently against the grinder’s side to loosen up any sticky pieces stuck in the teeth .

Step 3: Unscrew the chamber with the teeth to reveal the basket layer with your freshly ground cannabis inside. You are now ready to load it into your pipe, vaporizer, or blunt.

Step 4: Scrape some out of the kief you have collected in the bottom-chamber, with a piece of paper or the scraping-tool provided. Remember you can sprinkle kief into your pipe bowl or your vaporizer for more powerful natural effects, or save it for something else later.

Note: Over time you will notice that your grinder’s rotating motion might become more difficult. This means it is in need of cleaning. Use warm water and a cleaning solution made of isopropyl alcohol and salt to rub the grinder pieces and get rid of the stickiness. Brush any loose dry herb or kief from the screen with a clean toothbrush or beard brush.

How to clean a sticky grinder

You’ll need to clean your grinder every so often because it will become sticky with kiefy resin and be difficult to rotate. To clean:

You can also put your grinder in the freezer, which makes it easier to pick kief off.

For irredeemably sticky grinders, sometimes it’s best to replace the grinder altogether, especially if it’s a cheap one.

If you don’t have a grinder handy or if it’s too gummed up, try one of these methods to break down your herb:

Keep in mind that weed is very sticky and whatever you use to break up weed will also get sticky. We recommend not using anything that’s nice or that you don’t want to smell like weed. Cheese graters and coffee grinders in particular can be hard to clean of resin. 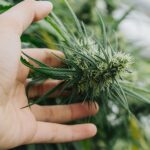