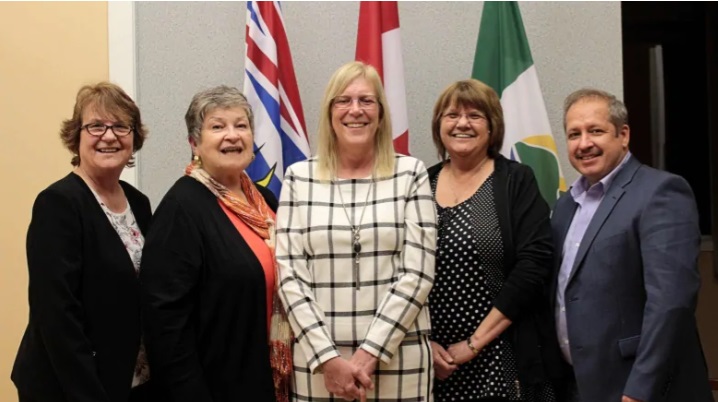 The mayor of Pouce Coupe, a small town in northeastern B.C., has been removed from most of her duties and has been asked to resign in response to a Facebook post she published earlier this week.

On Wednesday, Mayor Lorraine Michetti wrote “Don’t want Pipeline’s? [sic] They want to protect our land. Yeah ok” on her Facebook page, along with photos of homes with garbage-strewn lawns.

Regional officials quickly decried the post, which many felt was an insensitive, inappropriate and racist reference to Indigenous land defenders.

“I wish to clearly state that we find the sentiment in the post deeply troubling,” said the chair of the Peace River Regional District, Brad Sperling, in a written statement on Friday.

“Our anti-racism policy clearly and firmly commits the PRRD to conducting its business in an anti-discriminatory and anti-racist manner and environment.”

Michetti is a member of the regional district’s board of directors.

‘No place for racism’

“There is no place for racism, and the hateful comments it generates,” wrote Mayor Rob Fraser on behalf of the district.

“The First Peoples of the Peace are our friends and neighbours.”

In an interview with CBC News, Michetti denied the post had any reference to Indigenous people. Instead, she said it was a reference to anti-pipeline protesters more generally.

“I feel really bad for doing what I did,” Michetti said. “It was a spur of the moment thing.”

Michetti said the post was taken out of context.

The mayor says she has been bullied and harassed as a result of the post, which she says was made on her personal Facebook page and she removed after it was published.

“I’m an everyday person, too, and people make mistakes. And I made a mistake,” she said.

“I’m not a polished politician. I live in a community that has roughly 735 in it. I’ve lived here for 36 years.”

In a written statement, Michetti said she will take an awareness and learning program taught by a First Nations member of her community.

Coun. Ken Drover said the mayor wasn’t there, “although she was given notice and had every opportunity to attend.”

Council voted to remove her from all committee and board duties. They also asked her to resign, as there is no legal means for the mayor to be removed from council.

In a written statement, Pouce Coupe councillors said the mayor’s comments violated the council’s code of conduct, which “demands the highest level of integrity and ethical conduct from its members.”

Michetti said she intends to speak with a lawyer on Monday.

“I don’t know what I’m going to do. I’m not sure. I’m going to take some time and actually think about it,” she said.