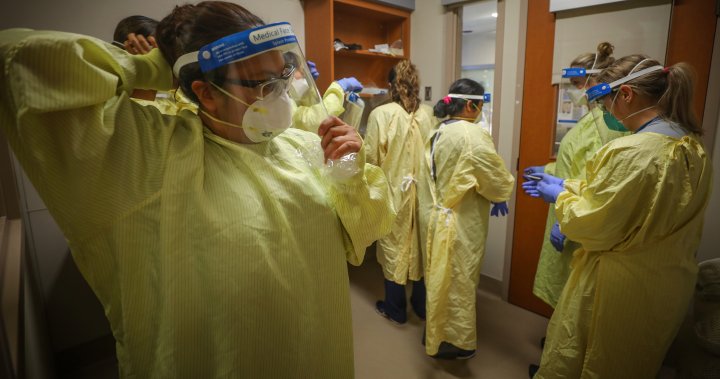 Alberta Health confirmed an additional 399 cases of COVID-19 were reported in the province over the last 24 hours on Thursday.

There were 280 people in hospital with 56 of those in the ICU.

Eight additional deaths were reported to Alberta Health over the past 24 hours, four of which were in the Edmonton zone.

A woman in her 30s, a woman in her 70s and a man in his 70s died. A woman in her 90s linked to the outbreak at Millwoods Shepherds Care Centre also died. Alberta Health said all four deaths included comorbidities.

A woman in her 40s with comorbidities died in the South zone.

There are now 4,484 active cases in the province, with the majority of those in the Calgary and North zones.

As of Thursday afternoon there were 1,510 active cases in the Calgary zone, while the North zone had 1,016 active cases.

The Edmonton zone had 897 active cases, there were 737 reported in the Central zone and 319 active cases in the South zone.

Five active cases were not attributed to any specific zone.

To date, 195,572 doses of vaccine have been administered.

There were 348 total cases of COVID-19 variants in Alberta reported on Thursday with 32 of those reported in the last 24 hours.