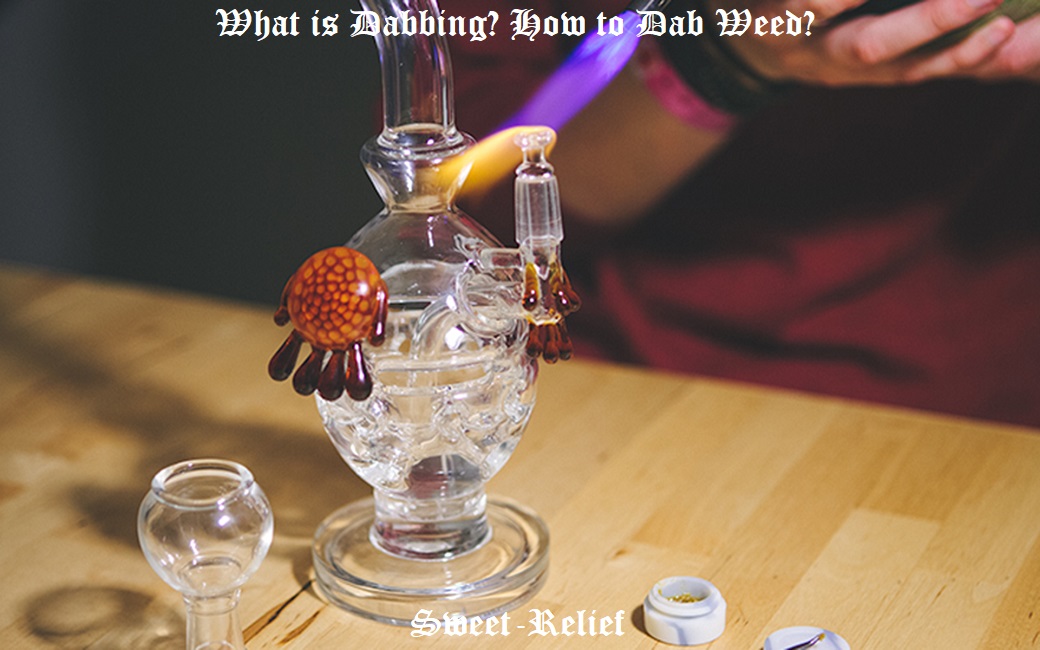 Dabs are a very concentrated form of cannabis, usually ranging from 70% to 99% THC. They are manufactured using solvents like carbon dioxide or butane to extract cannabinoids from flower and sugar leaf. The resulting concentrates go by many different names, depending on their consistency, including shatter, wax, and BHO. These concentrates are usually smoked by heating them on a hot surface, usually called a nail, and then inhaling the resulting vapor through a dab rig, much like taking a hit from a bong.

Most novice smokers and casual mmj users find dabbing too strong for their tolerance; but for many medical marijuana users, dabbing offers significant symptom relief to patients that have an unusually high tolerance for THC.

Dabs are portions of cannabis concentrates that you vaporize using a dab rig, through a process known as dabbing. This concentrated form of cannabis is usually much more potent than marijuana flower.

Additionally, because these blobs are typically made up of highly concentrated cannabinoids and terpenes, dabs are sometimes known to be very flavorful. And because you’re supposed to vaporize dabs instead of combust them, dabbing also delivers a very clean taste, if done properly. Popular examples of THC concentrations that can be dabbed include budder, badder, sauce, crystalline, live resin, rosin, and butane hash oil (BHO), or honey oil.

Dabbing has quickly become one of the most popular consumption methods among cannabis users, offering a potent high and flavor-packed experience. Consumption is usually done with a dab rig — a glass chamber similar to a bong.

Rigs typically require a titanium, ceramic, quartz or glass nail, also known as a banger. Think of them as the bowl, but made for a rig. Consumers use a butane torch or e-nail to bring the banger to a temperature that almost instantly vaporizes the concentrates.

Dabbing typically offers a more potent high and more immediate effects than smoking flower. It will typically produce a strong flavor and terpene-rich aroma. If you’re concerned about odor, you might be wondering, do dabs smell?

To some extent, yes, but the scent of marijuana concentrates do not linger for very long at all. Moreover, dabbing arguably offers even more discretion when handheld vaporizers and portable e-rigs are used.

The overt disadvantages to this consumption method are the necessity for tools and accessories, and the learning curve involved in achieving the perfect vaporization temperature. The temperature of the nail at the moment that you take the dab will affect the flavor, ability to clean your nail, and according to recent studies, it could alter the desired effects of the concentrate.

High-temperature dabs — 340-700 degrees Fahrenheit, or 170-370 degrees Celsius — will scorch your concentrates, giving off an astringent and harsh flavor. Those temperatures also tend to leave behind residue that is very hard to clean. At low temperatures — below 340 degrees Fahrenheit, or 170 degrees Celsius — also known as “low-temp dabs,” the concentrate is not fully vaporized, leaving behind a small amount of oil that can be easily removed with a cotton swab.

Why Do People Dab Cannabis?

People dab for several reasons. One of the main motivators is curiosity, as dabbing is one of the newer and more unique method of recreationally consuming cannabis.

Although the trend is certainly on the rise, with studies showing that cannabis concentrate sales increased 145.8% over two years (October 2014–September 2016), and comprised 21% of product sales.

Curiosity aside, people are also undoubtedly drawn to dabs due to their potency.

If you’re smoking a joint, THC levels will typically be between 12-25%, with 25% being some really strong stuff. Dabs, on the other hand, boast THC levels that reach upwards of 90%.

You aren’t just getting stoned when you take a hit off a dabbing rig, you’re going interstellar. As a result, dabs have also proven to be popular with veteran smokers who have high tolerance levels thanks to years of smoking the plant.

Lastly, you’re not smoking when you dab. You’re heating the dabbing nail and then placing the wax on top of it, which avoids many of the negative carcinogens and toxins involved with traditional smoking. And, given the potency of budder, wax and shatter, it’s unlikely you’ll be vaping that much to begin with.

Having a small, but highly potent dose of a cannabis concentrate can also be a popular option for those who use the plant for medicinal purposes. Through dabbing, you can access all the benefits of cannabinoids in an accelerated sense, while only having to inhale a small amount of vapor.

This was, after all, the reason Budderking made Budder in the first place:

“I didn’t create Budder so I could make money; I created it so people could inhale pure cannabinoids,” explained BudderKing.

“I see Budder as a spiritual THC high and a harm reduction method. One Budder hit gives you two joints worth of cannabinoids all at once, and it’s kind to your lungs.”

How Can I Dab Cannabis?

Dabbing may look complex, but once you’ve got all the parts it’s really quite simple. First, you’ll want to get your hands on a cannabis concentrate. If you wish to make some yourself, rosin is your best bet. All you’ll need is some parchment paper, a hair straightener, and some flower or kief.

For those who wish to access a more potent high, you can use Butane Hash Oils (BHO’s) such as shatter, budder or wax. These are the concentrates where you’ll find the highest amounts of THC and cannabinoids.

Though whatever you do, don’t try to make these at home. BHO’s can be highly explosive when made incorrectly, and many people have learned that lesson the hard way. Unfortunately, you’ll have to leave it to the professionals when it comes to most cannabis concentrates.

And don’t stress too much about whether you dab budder or shatter, as they’re virtually the same thing. The only difference between different types of BHO’s is their appearance, which is made through agitating the cannabis wax in different ways. BHO’s will generally have the same THC levels among them.

Okay, now all that’s out of the way, let’s get into it. Once you’ve chosen your concentrate, then you’ll need to pick out a dabbing rig.

The cost of a dabbing rig can range anywhere from $50 – $400 depending on the size, quality and design you wish to purchase. Some rigs can look very much like a bong, while others resemble something from a science fair. However, at the end of the day they all do the same thing; dab.

If you’re struggling to decide what model to go with, keep in mind that both Snoop Dogg and Cheech and Chong each have their own signature dabbing rigs. Did that just make your decision easier or tougher?