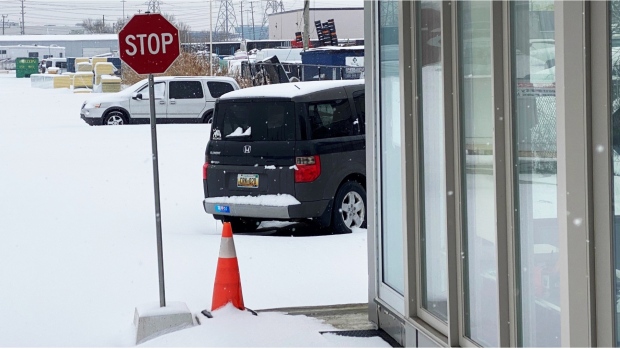 TORONTO — An American woman whose car has been left parked a in lot near Toronto Pearson Airport for nearly a year because of border restrictions said she is blown away by the “truly generous” Canadians who have offered to help her get it back.

Port Huron, Mich. woman Kim Richardson left her 2004 Honda Element in the Park2Sky lot on Dixon Road on March 11, 2020 when she flew from Toronto to Europe to undergo a medical procedure.

She said she originally paid $100 to leave her vehicle for the two-week period she expected to be overseas, but when border restrictions came into effect due to the COVID-19 pandemic she flew straight home to Detroit instead.

She said after several months of receiving no information about her car, she finally got a call from the owner of the parking lot who told her she’d have to pay $2,800 if she wanted it back.

CTV News Toronto contacted the owner of Park2Sky on Friday. He did not want to provide his name, claiming the story has led to threatening and harassing phone calls from strangers. He claims that Richardson only contacted him a month and a half ago about her Honda Element and that the bill for the 11 months that the car was parked is $2,000 and not $2,800.

He disputes Richardson’s version of events and also told CTV News Toronto that he has expenses and has been hit hard by the pandemic and has to still pay his bills. He also said he told Richardson she should hire a Canadian towing company to bring it to the U.S. border.

After the story appeared on CTV News Toronto, several Canadians reached out to offer Richardson their help getting her car back and even help to pay her parking fees.

Dwayne Steele, who owns a car dealership called Blackburn Automotive in Burlington Ont., is one of the people who tried reached out to Richardson after reading about her situation.

He’s offered to drive to Toronto, pick up Richardson’s car and store it for her until they can arrange to meet when the border reopens.

“I could have sat there and waited for other people to help but why not just pitch in,” Steele told CTV News Toronto on Saturday. “It’s not a big deal.”

“I could even drive across the border and give it to her. Anything I can do to help, I’m willing to do it.”

Another man named Grant Mitchell said he’s retired and has “plenty of time and room” to help store her vehicle.

In an e-mail to CTV News Toronto on Saturday afternoon, Richardson said the offers from Canadians are “amazing” and she is trying to determine what to do next.

“Canadians are truly generous and wonderful people,” Richardson said. “I’m so humbled and touched by these individuals.”

Stratford, Ont. woman Janelle Millen said she couldn’t believe it when she heard Richardson’s story because she is stuck in the same situation.

Millen and her husband parked their car at a long-term parking lot at Buffalo Airport on Feb. 22, 2020 before departing on a trip to Europe.

As the COVID-19 pandemic worsened, Millen’s flight home was cancelled and redirected to Montreal. She rented a car and made the journey back to her home in Stratford to self-isolate.

She agreed to pay US$50 per week to leave her car in the Buffalo parking lot, which means the bill for her 2007 Prius is now more than US$2,600.

Millen, who only paid $1,700 for the car three years ago, said if she had known earlier Richardson was in the same situation she would have offered to swap cars until the border reopened.

“The only way for me to manage getting it now would be to fly,” Millen said. She said she would then have to pay for a hotel, get a COVID-19 test, pay for the massive parking bill and then return to Canada and self-isolate.

Her husband was also recently diagnosed with Leukemia so she doesn’t want to travel if it will risk getting him sick.

“To say it’s complicated is the understatement of the century,” she said. “It’s been a horrible year.”