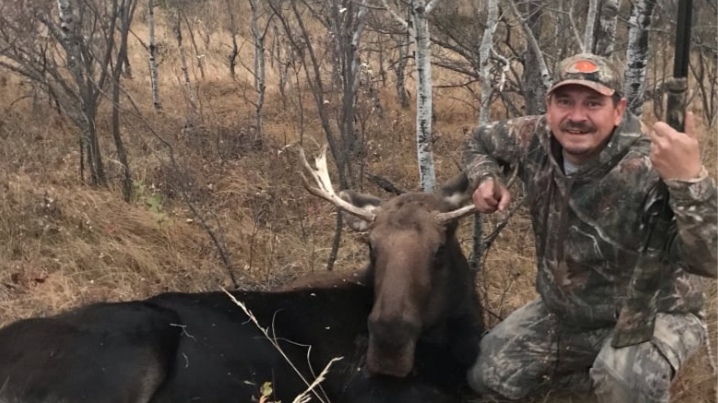 Some of Darcy Iron’s earliest memories are of hunting with his grandfather.

He remembers falling asleep on his grandfather’s boat early one morning when he was about four or five years old. Iron”s aunties used to bug him about how fast he’d run home after school, trying to get there in time to go hunting. He still remembers feeling crestfallen the days he missed out.

As an adult, Iron hunts to feed his small family. He said it’s cheaper and healthier as a single parent to fill his freezer with game meat. He is trying to instill his love of the land and hunting in his children.

Iron said he has always been aware of the tense relationship between treaty hunters and conservation officers in Saskatchewan. He’d had some personal experience, but on Dec. 30 he was detained by a conservation officer for more than an hour due to what could be summed up as a filing error.

The officer also confiscated Iron’s firearms for more than a month and refused to give them back until he could provide proof of a Possession and Acquisition Licence (PAL).

Iron said it stemmed back to him being charged criminally in 2006 and given a 10-year firearms ban. He said RCMP forgot to update his record once the ban ended.

Fast-forward to that day in late December.

Iron took his two children, nine and 11, to an area near Meecham, Sask., to watch for animals. He said he brought a firearm just in case the opportunity to put food in his freezer arose.

He encountered a conservation officer on his way to Crown lands and said it was a fairly cordial experience.

Iron said he was detained in the officer’s vehicle. He said he explained his situation and that the officer seemed understanding and contacted RCMP to verify the firearms ban was over.

Iron said the officer also told Iron he had warrants out for his arrest in Alberta and would have to wait for the warrant situation to be figured out before he could be released.

In the meantime, Iron had to wait in the conservation officer’s vehicle while his two children waited in the family vehicle.

“My daughter, she was crying when I went back to the truck. She was hurt,” Iron said, adding he found out she was scared he was going to be taken away by the officer.

“[My son] was able to pull it together a bit because he’s 11-years-old, you know, he’s a little man there, and trying to calm his sister down.”

Iron said the conservation officer only checked on his kids once in the hour-plus he was detained.

Iron was given a ticket for carrying a firearm contrary to a court order thanks to the erroneous ban label. Despite the alleged warrants, he was eventually allowed to leave. He said he had no idea why he would have warrants out for his arrest in Alberta and that he hasn’t been contacted at all by the RCMP about the matter in the nearly two months that passed between when he was detained and when he spoke with CBC News.

Iron said the firearms-related ticket against him was dropped.

Iron said he and the conservation officer made conversation to pass the time while waiting for response on both the warrants and the firearms matter.

“One of the things he did mention was, ‘you guys are always going around, you know, shooting animals with your windows down, shooting out of vehicles and making it bad for everybody else,'” Iron said.

Iron said the conservation officer tried to backtrack and told Iron he didn’t mean him specifically, but Iron pressed further and told the officer he felt the comment was directed at First Nations hunters specifically.

Iron also said he inquired about why his guns were being seized and felt uncomfortable with the response he got.

He said he was under the impression that as a treaty hunter, he would not have to obtain his PAL. He said the conservation officer told him he “needed to get into the 20th century” and obtain the licence.

In an emailed statement, the provincial Ministry of Environment said it would investigate the incident.

The statement did not say if the conservation officer would apologize to Iron. It said the ministry had not received a formal complaint from him about the interaction.

The ministry statement outlined the conservation officer’s reasoning for taking the firearms, stating a normal field check showed Iron had a firearms prohibition and outstanding warrants for his arrest.

“The officer attempted to confirm outstanding warrants as per normal standard process. Warrants must be verified by home RCMP detachment in which the file originates,” the statement said.

After a delay in getting a response from that home detachment, the conservation officer released Iron “and provided an opportunity for voluntary compliance with the warrants at a later time.”

The firearms had to be seized, the ministry said, due to the apparent prohibition which was eventually sorted out with RCMP.

As for why returning Iron’s firearms took so long, the ministry said Iron was required to comply with The Firearms Act and obtain his PAL before the guns were returned.

He said his grandfather referred to conservation officers as Kanaweechikeewuk, or the “ones who are always watching out.”

Iron said the areas where conservation officers operated was common knowledge among his grandfather and his social circle of hunters. Often, he said, they would avoid the areas all together, but run-ins still happened.

Iron said when he was in his teens, he knew of hunters who got into trouble for shooting in what were then newfangled things called wildlife corridors.

Hunters — treaty and non-treaty alike — can’t hunt in wildlife corridors in Saskatchewan. It’s a rule he said he never understood, but always respected.

Conservation officers, he said, would place animal decoys in the hopes of catching out-of-season hunters along the corridor on Highway 903 in Saskatchewan’s west-central, close to Canoe Lake.

Iron said he felt conservation officers used the method to target and punish First Nation hunters specifically, as they were placed close to the community and he heard of the decoys being used well before hunting season opened.

He saw historical parallels in the seizure of his firearms. Losing a gun, he said, could be detrimental to the well-being of a person’s family, as they were relied on for hunting and often too expensive to quickly replace.

The strained relationship was something he said he hoped to see change for the new generation of hunters and conservation officers — his kids included.

“The part that really gets me the most is that my children were involved,” Iron said.

“What they’re experiencing now is going to have an effect on them throughout their young lives and in the future and their outlook of conservation officers.”

Iron is calling for the officer to apologize directly to his children to reassure them that things can change for the better.

He said he has noticed a change in his children. They are talking more about race.

He noted how conversations around race are more prevalent online in the wake of the Black Live Matter movement and Indigenous rights-related subjects that made headlines last year. Even at their young age, his children took notice.

Their interaction with the conservation officer led to a topic he didn’t expect to talk with his kids about when they were so young: Saskatoon’s notorious Starlight Tours.

“It’s bad enough what they experienced. I do my best to try and explain to them, you know, what’s right and what’s wrong,” he said.

“You have to be proactive. You have to try and reassure them that things are changing. Eventually, you won’t have to go through situations like this when you’re out there in 20, 30 years from now.”

FSIN’s goal is the protection of inherent and treaty rights for First Nations people in Saskatchewan. FSIN Chief Bobby Cameron said he has heard of many instances similar to Iron’s.

Cameron said the FSIN was willing to go as far as Iron was willing to take the matter on his behalf — all the way to the Human Rights Commission if needed.

“To detain him in the vehicle for one hour or so, and have his young children in the vehicle crying and living in fear, not knowing where daddy is, you think [conservation officers] would ever do that to a non-First Nation hunter and his children?” Cameron said. “Never”

Cameron said Iron’s experience and the documented interactions between treaty hunters and conservation officers in Saskatchewan showed a lack of understanding of inherent and treaty rights. He said they highlight what he perceives as an old mentality among conservation officers, one that says First Nations people are always guilty.

He called for the conservation officer who detained Iron to issue an apology and for the ministry of environment to fire him.

“We want him terminated. That’s complete BS, on what he said,” Cameron said.

In a news release published Tuesday, the FSIN called for a full investigation and review from the ministry into Iron’s interaction with the officer.

The FSIN announced it had set up a website for treaty hunters to report run-ins with conservation officers while hunting.

The Ministry of Environment’s comment said conservation officers receive two-year diplomas in resource environmental law, which include a treaty and hunting rights component.

Once a position with the ministry is secured, would-be conservation officers take part in a 16-week education program through the Western Canadian Law Enforcement Academy, which also includes an educational section on Indigenous hunting and treaty rights.

Finally, the ministry said, it requires all staff including conservation officers to take part in Indigenous awareness training.

Cameron said the extra training he is calling for would basically be a stop-gap for what he hopes to achieve one day: First Nation conservation officers trained by First Nation communities using First Nation knowledge.

“There’s been a Chief’s resolution to start training and educating our own conservation officers on reserve, through our own institutions, to do enforcement, the preservation, the protection, all the things we were taught,” he said.