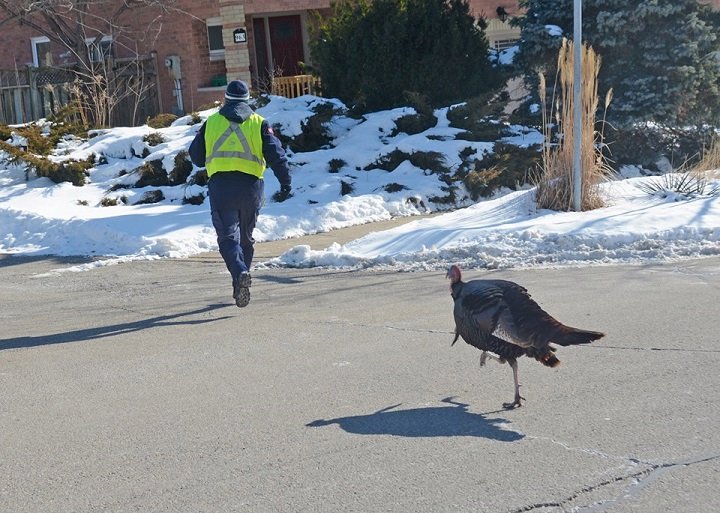 For one of North America’s largest urban agglomerations, the GTA sure does see a great deal of wild birds bullying humans.

From the infamous divebombing Red-winged blackbird (Dave) of Liberty Village to the notoriously agressive Canada geese that go nuts in Toronto every spring, sassy fowl are par for the course around these parts (golf course, that is, if we’re talking swans.)

No one specific bird has been known to chase people, however, as much as the wild turkey — an intelligent and adorable feathered friend who likes food almost as much as our beloved raccoons do.

They’ve stalked grandpas in Brampton. They’ve charged motorcylists in Whitby. They’ve tailed postal workers to hilarious effect (until they were killed, sadly) in Mississauga. There’s even an unofficial heritage plaque dedicated to the wild turkey of Christie Pits Park.

And yet, while videos of humans being chased around by turkeys are objectively hilarious, those who are targeted by the hangry rage of these massive birds can get more than annoyed.

They can get the tires of their cars pecked at relentlessly, for starters.

“Last weekend I was literally just walking on the sidewalk. The turkey was laying on the sidewalk and I didn’t see him,” says Alejando Ropain of an aggressive turkey who’s been hanging around his workplace in Mississauga since November.

“As soon as he saw me, BAM! He stood up and ran after me… He’s attacked me twice. I was once late because I didn’t want to leave the office for 30 minutes because the turkey was outside.”

Ropain, who admits that he’s super scared of birds in general, has filmed multiple clips of the wild bird attacking cars and loitering ominously outside office units near Centennial Park, just north of Eglinton.

“The animal is so smart. He’s chasing cars, pecking cars. He tries to peck at the wheels,” he told blogTO on Wednesday. “Last time I was going to take the bus, he chased me around a car. The bird isn’t even scared — it will stand in front of honking cars.”

He isn’t the only one, either — Ropain’s friend Brian Ashworth told blogTO that “this bird chases everyone in the area,” noting that multiple people have reported it to the City of Mississauga.

When asked about the turkey, the City of Mississauga confirmed that it was aware of the bird and its behaviour — but also presented a valid explanation.

“City of Mississauga Animal Services has been attending to wild turkey calls in the area of Orbitor Drive,” said a spokesperson for the department.

“Through our investigation we have determined that there is wildlife feeding occurring in the area. The wildlife feeding is the driving force behind the wild turkey sightings in the Orbitor Drive area.”

Apparently, “intentional wildlife feeding is causing the wild turkey to act aggressively with members of the public.”

“Once wildlife becomes food conditioned by humans they will start approaching humans because they see an easy source of food. They may act aggressively with humans if they are not fed by them,” explains Mississauga Animal Services.

According to Ropain, who has been dealing with these aggressive turkey attacks for months, a woman from a nearby office feeds songbirds every morning — something that some animal experts actually encourage over the winter months, but that could be attracting unwanted guests.

Mississauga Animal Services recommends never to feed wildlife and to report any wildlife feeding — likely on account of stories like this one.

Apparently, they’ve even tried to relocate the turkey to a more appropriate location, but it keeps on coming back in search of food.

“Animal Services Officers were able to capture the turkey and relocate it within 1 km of where it was captured as per the conditions of the Fish and Wildlife Conservation Act,” said a spokesperson for the department.

“Unfortunately, due to the feeding and the attractants provided by human activity the wild turkey continues to return.”

According to Ropain, the turkey does seem to disappear at night — perhaps into a nearby wooded area or ravine like its wild peers. Unfortunately, it reappears every morning and chases people in the office park as they walk from their cars to work.

Animal Services says it has been “extensively patrolling the area to monitor for wildlife feeding and address the wild turkey concerns,” but advises that people deter turkeys in the meantime by making a lot of noise and sudden movements.

“A strategy that you can use to deter wild turkeys is looking as big as you can,” said the agency. “Running away may cause the wild turkey to chase you.”