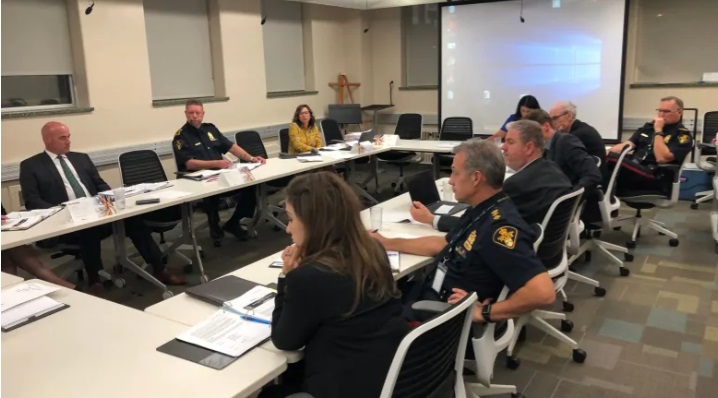 Phase 1 of project will see officers in downtown and Riversdale

A new type of police officer will soon be hitting the streets of Saskatoon.

At Thursday’s meeting of the city’s board of police commissioners, representatives from the Saskatoon Police Service (SPS) detailed plans to use unarmed officers.

The four new “alternative response officers” are intended to offer residents more access to support and a different tier of policing, while also saving the city money in the long-term, SPS said. The initiative is being launched as a one-year pilot project.

“These new members will be sworn in as peace officers under the provincial community safety officer framework and they’re going to be tasked with delivering public safety programming in instances where an armed police officer isn’t required,” SPS inspector of special projects Darren Pringle told the board.

“Our initial plan, which is Phase 1 if you will, is to prove this concept in the complex needs environment of downtown and Riversdale.”

The new officers’ duties while walking the beat will include connecting with vulnerable people, finding the support people need through outreach and referrals, and regularly engaging with businesses and citizens.

Pringle said the service is recruiting for the program and noted there are people eager to be involved, with some who applied to be regular officers asking to be switched over once they heard of the pilot.

“We’ve got a number of people who have human service backgrounds, which is exciting, because that was one of the fundamental principles behind the alternative response,” said Pringle.

“Bring in a different kind of human service professional who may be drawn more to the outreach, and the community engagement, recognizing there may have to be some, small, minor enforcement that’s done.”

Savings from the project would start slow, but the officers would eventually cost 10 to 15 per cent less than a regular constable, SPS said.

While the main purpose of the new officers is to provide people with an access point to police who are not fully armed, duties would also include everything from investigative support — like guarding crime scenes — to enforcement support —  like helping traffic officers.

Saskatoon’s Police Chief Troy Cooper said that while the officers were designed as an efficiency measure, their scope changed as the process developed, saying the officers, “certainly are malleable.”

“That’s the value of the program,” he said.

“As we heard from the community about what they wanted in response, and reimagining the role of police, they fit that bill very cleanly.”

Cooper said he thinks the program will get a lot of national attention, noting police services in other municipalities are looking for similar solutions.

“What we heard from our community is what was heard across our nation,” said Cooper.

Commissioners at the meeting were excited about the program. While they asked for the service to ensure there are hard measures in place to gauge how the pilot was going, board chair Jo Custead said the new officers would be a welcome addition.

“The board is definitely looking at the culture of community safety and I think this is going in the right direction,” she said at the meeting.

The program will be included in a larger report SPS is set to deliver on a later date taking a deep dive into the role of police in the city.

Mayor Charlie Clark, who sits on the board, congratulated SPS for the work and research developing the program, which he says will help build relationships in the city.

“My main hope is that we really make sure that we’re getting the maximum value out of each of the parts of this tiered policing model by having them all work together, communicate actively between each other, and see how they can build on each other’s strengths,” he said.

Funding for the project is available from the 2021 budget. The program is currently projected to be on budget.