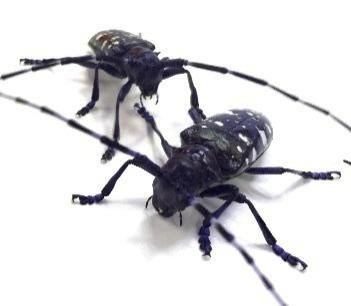 Roe spoke with SooToday ahead of Invasive Species Awareness Week, which takes place Feb. 22 to Feb. 26.

Invasive species are organisms (including insects, vegetation, animals and fish) which can wreak ecological, economic or social havoc in environments to which they are not native, crowding out or competing for light, water, and nutrients, preying on native species, or acting as carriers for diseases or parasites that could spread to native species.

Easily transported from one area of the globe to another whether accidentally or deliberately, invasive species are a worldwide problem.

“They’re quite striking, quite distinctive…big, black and white with big long antennae,” said Roe of the Asian long-horned beetle’s appearance.  “We never had any here (in the Sault and Algoma region).

Want to read more stories about business in the North? Subscribe to our newsletter.

“The only places that had it in Canada was in the Toronto-Vaughan area and then in Mississauga. There were two small areas that were quarantined and eradicated,” Roe said.

“It has been declared eradicated in Canada so we’re really lucky an early response (in Toronto in 2003) was able to detect and eradicate the infestation. We did find a second infestation in 2013, but just this last spring, in 2020, Canada was able to show we’ve eliminated all evidence of Asian long-horned beetles and we haven’t found any new infestations in the last five years.

“So for Canada, we are actually Asian long-horned beetle free, which is fantastic news,” she said.

Now, the bad news. The threat of new infestations of that type of beetle is still there (though they are not harmful to humans or animals).

“Their threat is to the plants and trees they eat,” Roe said.

“There are still multiple active infestations in the United States, and last year our partners at the Canadian Food Inspection Agency (CFIA) had announced they had a live interception in a shipment in Edmonton, AB, so the threat and the risk to Canada certainly (still) exists and that’s why we want to develop our tools to respond rapidly if we find anything new, to improve our surveillance.”

There are few things more Canadian than maple syrup (apart from hockey and Gordon Lightfoot), and the Asian long-horned beetle represents a threat to Canada’s maple syrup industry.

“Maple trees, particularly in our area, are a really important part of the economy and the maple syrup production would be absolutely devastated if we did end up with Asian long-horned beetle infestation within our area, which is why we still want to be vigilant,” Roe said.

That vigilance, she said, is not only up to the scientists to keep up, but to each one of us as we walk through our gardens, parks, trails and other green spaces. In fact, the Asian long-horned beetle was first spotted and reported in Canada near Toronto Pearson International Airport in 2003 by a private citizen and classified as an invasive species by scientists.

“I think the best thing people can do is pay attention to the nature around you and be curious. Usually it’s curiosity that cues someone to take a picture of an odd-looking bug they’ve never seen before,” Roe said.

Transportation of firewood (one place where the beetles like to live) from one area to another is a big risk.

“Burn it where you buy it,” Roe said.

If you see an Asian long-horned beetle (typically active from May through July, but which can survive cold Canadian winters), take a photo with your cell phone and report it to Natural Resources Canada at the Great Lakes Forestry Centre, Roe urged.

If you don’t actually see any of the beetles, spotting holes in trees big enough to put your thumb in are a tell-tale sign of their presence, she added.

The beetles, which bore into trees, tend to come into Canada on wood pallets used in shipments of a multitude of goods arriving in our country from around the world.

Roe has been working on developing rapid screening tools to trace new arrivals of the pests into Canada to help us improve our surveillance of high risk imports, as well as their countries of origin.

“We’re taking a lot of genetic information about insects from their invasive range and native range and using that to identify unique variants that would be traced back to specific parts of the world. The tools are very similar to some of the tools that have been developed to screen for COVID and COVID variants,” Roe said.

Development of screening tools is still underway, with a view to have these new tools in place over the course of the next year, Roe said.

Detection is one thing, but can these beetles be completely eradicated? That’s the hope, but it involves cutting down many, many trees.

“They are really bad flyers. They don’t move from place to place really well. If we get there fast enough you can cut down all the trees they’re in and destroy those trees and you will have destroyed the insects from the inside,” Roe said.

That, of course, leads to deforestation (a sad sight to behold for anyone with even the slightest love for nature) and the need to repopulate the forests with new trees (a huge expense).

That emphasizes the need for citizens to keep their eyes out for invasive species of all kinds, in the same way citizens are encouraged to keep their eyes peeled to help police fight crime. “The more eyes we have on the forest, the better,” Roe said.