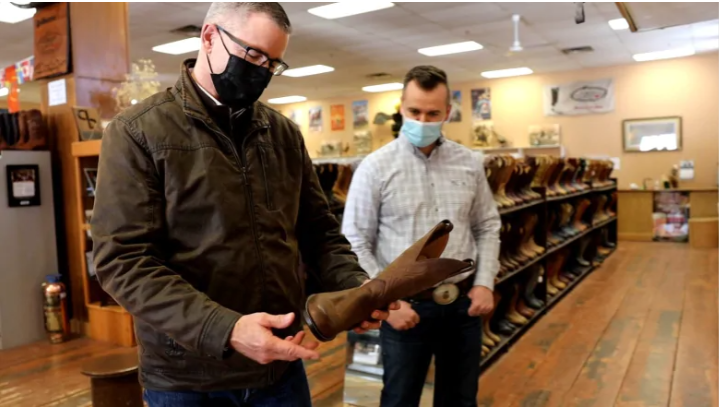 Canadian finance ministers traditionally hold a prebudget event with the media to unveil their new footwear and drop hints about the government’s plan for the upcoming fiscal year.

As with many traditions, the pandemic has forced that practice to the sidelines, at least for 2021.

Instead, the Alberta government released a fully produced video on Wednesday of Finance Minister Travis Toews shopping for new footwear at the Alberta Boot Company in Calgary.

Toews told store president Ben Gerwing that he wore his old boots for the last two budgets and wanted to change things up in 2021.

“I’m going to go to an Alberta-based manufacturer and buy made-in-Alberta boots because economy recovery is key to dig ourselves out of the hole we’re in,” Toews said.

The hole Toews is referring to is a debt of nearly $100 billion and a deficit that was forecast at $21 billion at the end of the second quarter of 2020-21 fiscal year.

Over the last week, Alberta’s United Conservative government has formally started using its message of protecting “lives and livelihoods” in its communications, a theme that will likely extend into the budget. Premier Jason Kenney said there will be spending on health care and job creation.

But sectors that rely on government funding, like post-secondary institutions, are awaiting Thursday’s budget with trepidation.

Ricardo Acuna, president of the Association of Academic Staff at the University of Alberta, is worried the government will deepen previously announced cuts to post-secondary spending, making it impossible for the university to fulfil its mandate.

“Post-secondary education doesn’t get the profile that health care has particularly during a pandemic,” he said. “So the fear is that … they will see it as an easy cut.”

There are also fears the province will cut jobs and slash services in a bid to save money. Government negotiators have already tabled salary rollbacks in contract negotiations with nurses and provincial public service workers.

Kenney has ruled out the introduction of a provincial sales tax. The government instead wants to increase revenue by creating conditions for new businesses to set up or move to Alberta.

In a news conference Tuesday, Kenney said introducing new taxes isn’t an option when the economy is performing poorly. He said the budget would include additional spending on health care and measures to create jobs.

“As much as I hate deficits, now would be the worst time to cut billions of additional dollars in spending when we need it in health care and we need it to help stimulate economic growth.”

Kenney said the government will continue to exercise spending restraint which includes negotiations with government unions.

“It’s been a long time since an Alberta government had the willingness on some things to say no, so that we could say yes to a sustainable fiscal future,” he said.

Guy Smith, president of the Alberta Union of Provincial Employees (AUPE), said his members are bracing for the worst on Thursday. He reminded the government that many AUPE members worked on the front lines during the pandemic.

“We hope that the premier and Finance Minister Travis Toews remember that their job is to protect and create jobs and to save health care, but none of their actions so far shows that they understand this,” Smith said in a news release.

The Official Opposition NDP called on Kenney to invest in health care, so the province can catch up on surgeries that were delayed due to COVID-19.

The NDP also wants Kenney’s government to help small businesses with rent, insurance and utility bills as the pandemic continues.

Lethbridge-West MLA and NDP finance critic Shannon Phillips said the government has wasted billions of dollars on an energy war room, the Keystone XL pipeline and corporate tax breaks. She wants a plan to diversify the economy and lessen the province’s dependence on resource revenue.

“I’m looking for a government that has been chastened by many of their failures including their failure to properly manage the pandemic and the economy,” she said.

Both she and NDP House Leader Christina Gray accused the UCP of not acting on Albertans’ priorities on health care and job creation.

The first set of government bills on the economy include allowing MLA recall and citizen-initiated referendums, which they say reflects the UCP’s political agenda and will not create jobs.