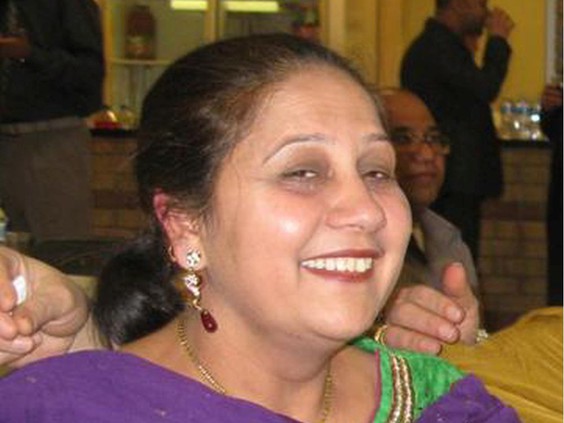 Hundreds of bloodstains, some as small as a millimetre, were found in the main-floor living room area, a forensic analyst told an Ottawa court.

Blood belonging to a woman accused in the brutal slaying of her lover’s wife was found at the scene of the killing, a forensic analyst told an Ottawa court Thursday.

Staff Sgt. Ugo Garneau was called in to examine bloodstains in the suburban Ottawa home where Jagtar Gill’s body was found on Jan. 29, 2014, he testified.

Hundreds of bloodstains, some as small as a millimetre, were found in the main-floor living room area, including on the couch, the hardwood floor and the underside of a table, he said.

Samples were taken for DNA analysis, and while several were linked to Gill, at least one sample taken from the living room rug was linked to Gurpreet Ronald, he said.

Ronald and Gill’s husband, Bhupinderpal Gill, have pleaded not guilty to first-degree murder in connection with the death.

Jagtar Gill’s body was found by her husband, their eldest daughter and a cousin on Jan. 29, 2014 — the day of the couple’s wedding anniversary.

She was badly beaten, her throat and a wrist slashed, in the family’s home in Barrhaven.

The Crown alleges Ronald and Bhupinderpal Gill worked together to carry out the killing.

Prosecutors argue Bhupinderpal Gill was tasked with isolating his wife that day by taking their daughter out of their house on errands, allowing Ronald to come in and kill his spouse.

Several first responders called to the scene that day have testified they initially believed the death to be a suicide.

Sgt. Ian Matyas, who was a constable at the time, said Thursday he went up to the second floor of the home to search for a possible suicide note when he spotted bloodstains.

There was one on the mat in the ensuite bathroom, one on the bathroom door and another on the door to the walk-in closet, he said.

“I found the blood concerning because there wasn’t very much of it,” which didn’t fit the nature of Jagtar Gill’s injuries, he said.

“I didn’t understand how, given the state of her wrist, there could have been that small amount of blood.”

The officer said he later noticed a bloodstain on the snow in front of the home as well.

Another officer testified Thursday that she encountered Ronald outside the Gill home that afternoon.

The officer told the court she informed the woman that Gill had died, then consoled her when she appeared distraught.

“She was just a concerned neighbour,” she said, noting the woman offered to take care of Gill’s children while police were at the home.

Gallichon testified that she considered the encounter “insignificant” at the time, but later recognized the woman in a news article as one of the accused in Gill’s death.

A paramedic who was called to the scene testified Wednesday that a woman she believes to be Ronald approached her outside the home.

The trial is taking place in an Ottawa courthouse, but is also accessible through videoconference.

This is the second time Ronald and Bhupinderpal Gill are being tried in connection with the killing. A new trial was ordered after Ontario’s Court of Appeal found the judge who oversaw the first one failed to properly instruct the jury.