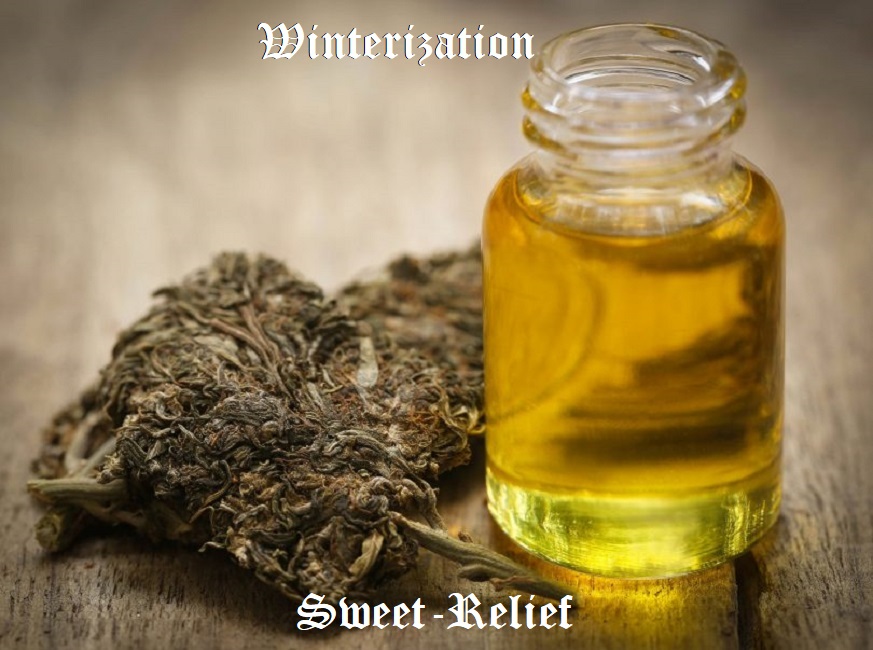 A refinement process used to remove fats, waxes, and lipids from extracts. The winterization of oil purifies crude extracts, increasing the quality and flavor of the resultant oil. Cannabis winterization is achieved by mixing  cannabis extract with ethanol and freezing the solution to allow the undesirable compounds to solidify. The solution is then passed through a filter, separating, or winterizing, wax, lipids, and fats from the oil. The final step involves removing the ethanol from the solution. The finished product of winterization, also known as de-waxing, is considered a winterized extract.

How to winterize BHO

Winterization can also be used to clean up butane hash oil (BHO), one of the most popular cannabis concentrates. BHO is also sometimes referred to as butane honey oil, for the yellow-gold color it takes on after the butane has been purged.

BHO extraction can be risky and is a job best left to experts. Winterizing BHO can be done at home; however, it should be performed with appropriate caution. The winterization process for BHO requires the butane extract to be blended with ethanol. The solution is then frozen to force undesirable substances to become suspended, so they can be effectively filtered out. If the product is still suboptimal, these steps can be repeated until the solution becomes a golden wash. Finally, the ethanol must be purged from the solution.

Winterized BHO is available in a range of different consistencies, such as shatter. Winterized shatter is a cannabis concentrate that is translucent, glass-like, and very potent.

Winterization can also be carried out on cannabis concentrates that have used liquid carbon dioxide as a solvent instead of butane. The process of winterizing CO2 oil is very similar to the process used for winterizing BHO.

Have you ever purchased cannabis oil and wondered how it was made? Do you hear the term “distillate” or “concentrate” without knowing what they are?

Both of these terms along with “extract”  are used to describe a cannabis oil produced by extracting the THC and CBD, along with a few other compounds from the cannabis.

To make cannabis oil, the impurities have to be removed from the plant. Similar to squeezing an aloe vera plant leaf in your hand to get aloe vera gel from it, machinery does the same to cannabis. But with the product come unwanted things: such as chlorophyll, plant residue, and lipids. Other compounds are also removed that complete the cannabis profile like terpenes.

With various processes such as winterizing, these unwanted things can be removed and the pure oil remains.

Manufacturers produce varying levels of purity, all based on the method/ products they use to initially to make the oil, how they remove impurities, and what things (like terpenes) they add back in after the fact.

Winterization removed the lipids, waxes, chlorophyll from the cannabis. Your final product will be more transparent if you winterize before further extraction.

There are a few common methods of how to winterize cannabis, including:

Cold Ethanol Extraction: This method works great by removing the majority of the lipids from the extract. The colder the ethanol, the more effective this process is.

Butane Extraction (BHO): This method is often used to make cannabis shatter. It is also quite effective at removing the impurities from the extract. However, butane is very flammable so take precautions if you want to attempt this method.

CO2 Extraction: This method involves expensive equipment, and is usually done exclusively by commercial producers. It is not as effective at removing the impurities as the other processes, but it’s great at preserving the terpenes.

Distillation is an additional step that separates the molecules from the cannabis extract and then gets rid of the ones that are unwanted, leaving behind a transparent concentrate. The oil has a slightly higher level of purity, and by extension, potency in some cases.

This is because the boiling point for cannabinoids is quite high, so most manufacturers using this method will distill at lower temperatures, but some use a short path method that vaporizes the cannabinoids, removing the unwanted material in the process, and then transfers the vapor into a consolidation system where it forms back into the oil. This process can be used over and over, heating and cooling until the plant matter, residual solvents, and chlorophyll are all gone.

Below is an image of a short path distillation unit. As you can see, it’s quite high-tech!

Remember that with winterization or distillation, the solvent-free cannabis oil that you get as a final product has most of the terpenes removed. That said, the manufacturer can, and often does, reintroduce terpenes after the fact.

These terpenes, found in many plants other than cannabis, have unique smells and tastes that the pure cannabinoids do not. So, removing them from the oil will produce a product with a different smell, taste, and impact than what you’re looking for. Moreover, the terpenes are what provide some of those highly sought-after medicinal properties.

Take a look at this list of the most common terpenes found in cannabis. Note the varying scents and medicinal properties each terpene provides.

When it all comes down to it, the method used is not nearly as important as whether the given method was done correctly, producing a high-quality oil. If you pick the winterized cannabis oil as your product, remember that the final oil is more concentrated, so it is going to be more potent, and will also provide a stronger high. If you are using the oil for medical purposes, talk to your doctor about what potency is best for your condition, and what dosage and strength you need.

Distillate:  This is an additional processing completed after winterization. During this process, compounds such as THC and CBD are isolated to make a very pure, potent product.

High Terpene Full Spectrum Extract (HTFSE):  This is a form of concentrate that produced to preserve the original terpene profile, so the flavor/ medicinal properties are the exact same as the flower. This is beneficial for individuals who want the benefits of terpenes without the damaging effects of smoke on your lungs. HTFSE is commonly sold in vape pens

Honey oil: Honey oil is a type of cannabis concentrate that involved first winterizing the cannabis. It is purer than cherry oil. It is common to use isopropyl alcohol, ethanol alcohol, or butane (BHO) to isolate the cannabis oil. If you’re interested in making your own honey oil, keep reading!

Cherry oil: Cherry oil is a less refined cannabis oil. This is because more of the plant lipids are present, as the cannabis was not winterized first.

Shatter:  Shatter is often made using the butane extraction process. It is less pure than some of the other oils mentioned but is still a very common and desired product.

The Easiest Way to Winterize Cannabis at Home

Winterizing cannabis at home is very simple. All you need to do is take about half an ounce of your favorite cannabis strain, place it in a mason jar, fill the jar with your choice of isopropyl alcohol or ethanol alcohol, then place it in your freezer for at least 24 hours. After that, you can move onto extracting the THC and other desired compounds from the cannabis. Watch one of the videos below to learn all the steps!