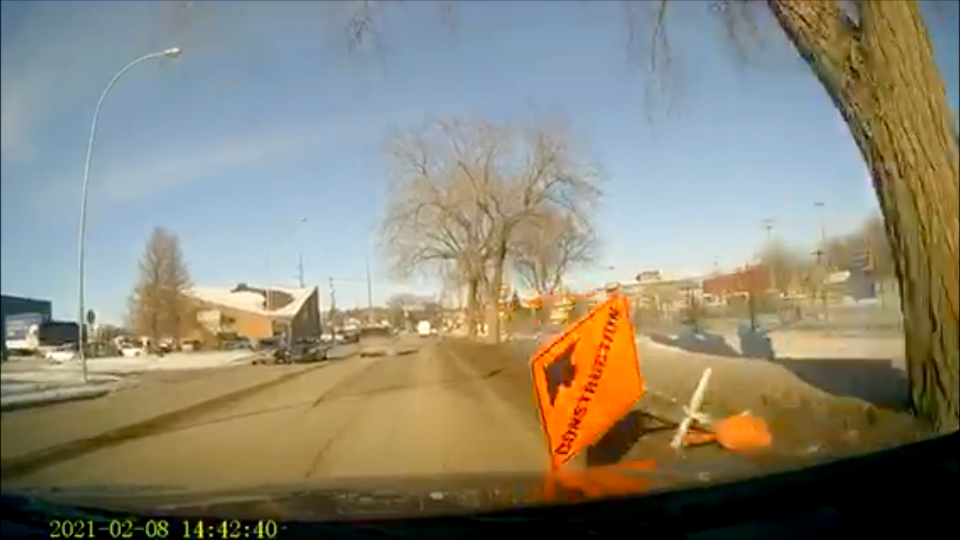 SASKATOON — A Saskatoon Uber driver says a construction sign damaged his vehicle and put him out of work for a week.

Tarik El Makaoui’s dash-cam footage from Feb. 8 shows a sign on 2nd Avenue North, held up by a sandbag, propel into the road and hit the front of his car.

“It was shocking, my customer was scared too,” El Makaoui told CTV News.

El Makaoui says the $3,000 damage to his bumper, hood and light was covered by insurance.

But the $700 deductible, and the week without income while his vehicle was getting repaired, was not covered.

El Makaoui says the damage is the city’s fault for not properly securing the signs.

In the dash-cam footage, it appears another sign, further down the street, is also laying in traffic.

El Makaoui is calling on the city to compensate him for the deductible and the time he was unable to get behind the wheel.

Saskatchewan Government Insurance (SGI) says in cases where a driver believes a municipality is at fault, and an adjuster believes there’s solid evidence, SGI will send a “demand letter” to the municipality’s office.

“If the customer feels strongly the city was responsible, and after gathering information our adjuster feels the same way, our adjuster will send a demand letter to the municipality — either to make a claim, or to discuss the possibility of liability,” SGI spokesperson Tyler McMurchy tells CTV News.

McMurchy says if SGI was able to recover funds, the driver could be reimbursed for the deductible.

“If we were to reach out to the city pursuing recovery, we would make a mention of the downtime and request that the city also compensate, or at least discuss compensation with the driver directly,” McMurchy says.

El Makaoui says he has yet to hear back from the city.

“The city does not disclose specific details related to claims as that is a matter between the city and the claimant, and may result in legal proceedings,” Cindy Yelland, Saskatoon’s solicitor, said in an email.