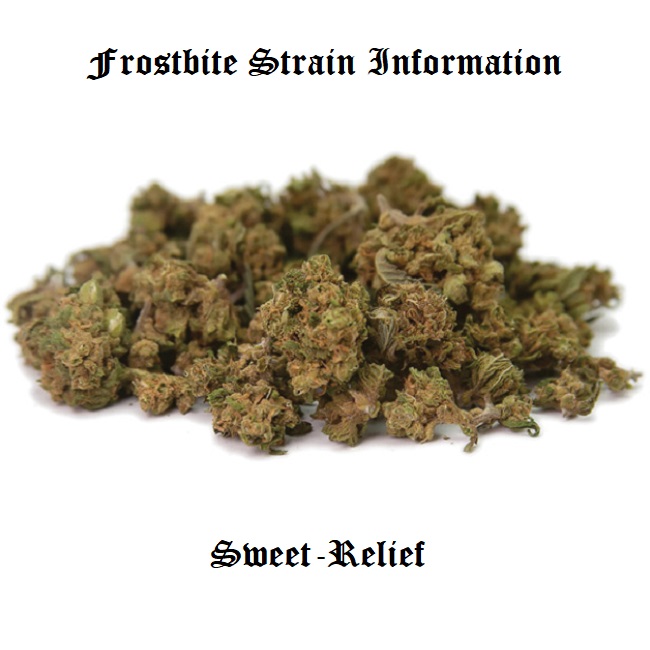 Frostbite is a mostly sativa strain whose trichome-covered flowers look as if they should be frosty to the touch. The strain’s aroma is warmer, evoking earthy and spicy, tea-like notes. These plants do best when grown indoors, flowering at 8 to 9 weeks and producing heavy yields.

The long-lasting sativa cannabis strain Frostbite emits a spicy, fruity scent with skunky undertones. It will leave an aftertaste that’s similar to herbal tea, with some reviewers noting it tastes more of sour pine. The buds of Frostbite are seemingly light green, turning to a dark purple at their edges and covered with a thick layer of trichome crystals that cause the buds to look frostbitten. This strain is sticky to the touch with orange pistils that jut out like trees in a snow-covered forest.

The parent strains of Frostbite are currently unknown.

The THC content is still currently up for debate, but its high is quite compelling. One can expect to feel a long-lasting high of up to two hours. It induces the munches, creates a cerebral buzz that lift’s one’s spirits and causes phases of euphoria. Its effects will also cause sleepiness after the high wears down, so evening use is suggested. It will leave the consumer in a pleasurably mellow and relaxing mood.

Growers will enjoy the heavy yields of Frostbite once it flowers after eight to nine weeks. Its stems will need support once flowering begins, its dense buds often causing stems to bend and break.

In contrast to its wintery aesthetic, this powerful strain worms from within and leaves you feeling hungry and happy. The origins are highly debated, but many believe it is a child of Afghan Kush and TGA Subcool Deep Purple. The source of the original breeders is also somewhat hazy with some claiming it to be Baked Beanz and others suggesting it is Camera Seeds. Whatever the truth, this is a hard-hitting bud with very effective medicinal uses.

Aptly named, Frostbite is completely frosted in white and blue hues, sticky resin, and white trichomes, making it look like it just survived 100 years of winter. The spicy tea notes and piney flavors give this strain a feeling of sitting by the fire with a hot toddy as the snow falls outside. The fruity and hashy aromas are in stark contrast with its appearance and taste, but offer a nice, tart smoke joined with robust THC levels and a potent high.

As delicate as the bud appears is how equally potent it is in behavior. This sativa-dominant strain hits hard from the get-go and is not typically used for recreational purposes, however, it is not totally uncommon. This high can best be described as munchie inducing, cerebral in nature, and body buzzing experience so heavy that the world ‘relaxing’ is an understatement. This strain will lift your spirits and have you happily stoned and dumb in mere moments.

This strain is medicinal by design and, as mentioned above, is primarily used for medical treatments such as chronic pain, muscle tension, and muscle spasms. Because of its intensely sedative properties, users can find ultimate relief from the above conditions. Additionally, it is often used for eating and mood disorders because of its highly stimulating effects.

In a surprise plot twist, although these buds are reminiscent of the great outdoors, this plant does best when grown inside under lights. It will produce heavy yields indoors in around 8 to 9 weeks and its yield falls on the spectrum at an intermediate level. The buds are medium in size when fully developed and will have long orange hairs piercing the blue, green, and white hues of the plant.

Whether you want to find the ultimate stony high or if you utilize this bud for its sought-after medical purposes, you’re bound to love the way you feel. Indulge in the great flavors and warm sensation that takes over your body, and don’t forget to stock up on your favorite snacks. You’ll need those.

Frostbite is a sativa dominant strain with a 15:85 indica/sativa ratio. Not only is it incredibly potent but it is one of the few strains that is long-lasting as well. The strain is mostly recommended for patients who are suffering from different medical conditions but is equally effective for those who are looking for an all-time high. The buds are green in color with hues of blue and orange hairs seeping through its surface. Frostbite smells fruity, hashy and dank but its taste is completely different. The strain delivers an exceptional blend of sour, pine, hash and earthy flavors, which is something to look forward to. The strain is known for giving its users the munchies. But that is not all. It offers a cerebral buzz that is just as good as its body stone. Individuals will feel euphoric and happy after smoking the strain and will find relief after a tiring day’s work. The effects are calming and can put you to sleep as well but that depends entirely on how much of the strain you have consumed. As mentioned earlier, the strain is used mostly for its medicinal properties and has been used to treat severe conditions like pain, anorexia and even mood disorders.

Medical uses of the Frostbite strain

Side effects of the Frostbite strain

Information about the Frostbite strain

The parents are unknown

The strain has a score of 7 on our stoned meter

The breeder is unknown

It takes 8 weeks to flower

Indoors is the ideal growing method

It is a short plant

It has a high yield

A bit of experience is needed

No potential problems have been reported